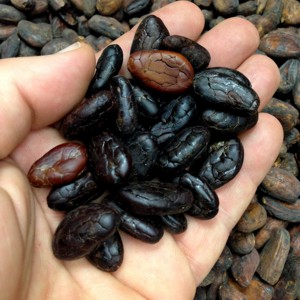 What do Ebola and Chocolate have in Common?

It’s a little convoluted, but there is a direct and dire connection. It seems that much of the world’s cocoa bean crop comes from West Africa. And that’s where the Ebola Epidemic is currently raging. Shortages and ensuing price hikes for cocoa and chocolate are already being forecast… 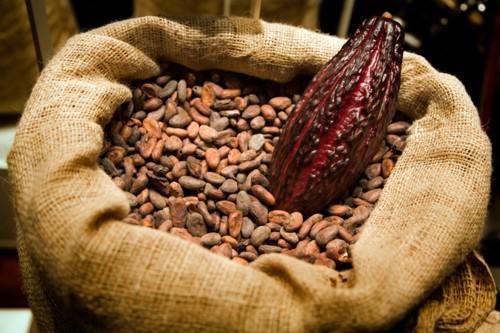 A Cocoa Pod, full of whitish, fuzzy, fresh cocoa beans. You wouldn’t recognise them
to see them. The individual ‘green’ Cocoa Beans in the jute sack are ready
for export to Chocolate Makers who will roast, grind and conch
(slowly cook) them into what we know as Coocolate.

I was ashamed of myself for not realizing the possible consequences in the Comfort Food Community of the West African epidemic sooner. In fact, I only made the connection after reading a recent Yahoo! News post.

The widespread, deadly spectre of Ebola has seriously disrupted the labour pool and the transportation system in affected countries. Exporters there say that the mere fear of shortages has already driven prices to three-year highs in some cocoa production areas. Commodity brokers on Wall Street warn that cocoa prices could easily double before the Ebola crisis is over.

With the close connection between cocoa supply and the travel and trade restrictions posed by the Ebola situation, it’s not surprising that major cocoa buyers, such as Mars and Nestlé are contributing significant amounts to West African emergency aid funds through an industry group known as the World Cocoa Foundation (WCF). The Foundation is not only into benevolent measures for its members but, right now at least, is heavily involved in building a more sustainable cocoa agriculture in its primary supply areas. Who knew so many people cared so much about your chocky fix?