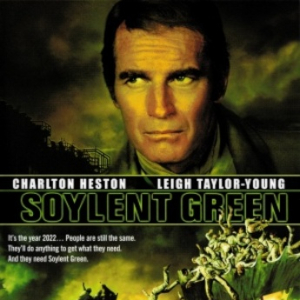 Major corporations and governments remain confident they can ‘catch up’ on global warming and its attendant evils, in spite of the persistent warnings by scientists and weather experts that we, as a global society, won’t make the deadline for converting to sustainable, healthy food and energy systems… 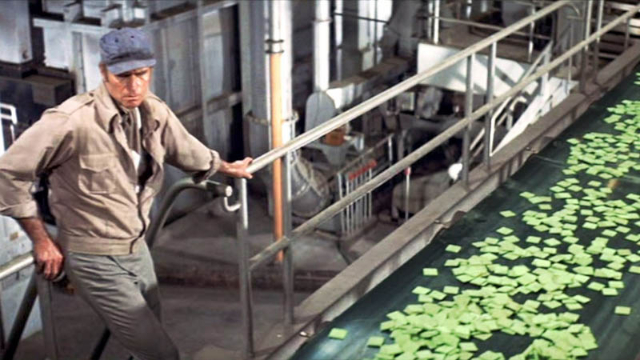 Frank Thorn (Charlton Heston) watches Soylent Green wafers travel down
the conveyor to ‘packaging’ in the movie of the same name (1973).

The generally-accepted deadline for halting global warming and bringing plant-based proteins mainstream is 2050. But many in the know say we have only until the 2030s, before the soils and waters of Earth are irreparably damaged. Some even contend that it’s already happening.

Yes, we’re already pushing hard into the still largely unknown territory of plant-based meat substitutes, and electric cars are finally coming into their own. But what if we really don’t make the deadline?

In 1966, Golden Age Science Fiction author Harry Harrison wrote Make Room! Make Room! a novel about a dystopian future just like the one we’re facing now. Though the story is replete with evil human agents, the real, overarching villain in the piece is – Yup! – global warming. The book became the basis for the 1973 movie, Soylent Green, whose plot involved the assassination of a corporate mogul whose company was responsible for supplying half the world’s food. In a nice, prescient twist of the knife to current food production ‘norms’, the product, Soylent Green, was allegedly made of highly processed, abundant sea algae.

But wait! Weren’t the seas already dying? Where did that algae come from, then?

Let’s not get ahead of ourselves…

A Wikipedia so succinctly puts it: “The the cumulative effects of overpopulation, pollution and an apparent climate catastrophe have caused severe worldwide shortages of food, water and housing. There are 40 million people in New York City alone, where only the city’s elite can afford spacious apartments, clean water and natural food, at horrendously high prices.”

The central characters in the story are NYPD detective Frank Thorn, played by Charlton Heston (a gumshoe in the tradition of Blade Runner‘s Rick Dekkert), and retired engineer Sol Roth, played by Edward G. Robinson (his last screen appearance). Thorn and Roth each live in their own half of a subdivided apartment. When Thorn catches the case of the mogul’s assassination, Roth provides vital background on the climate change disaster and points the detective in some ‘right directions’.

In classic whodunit fashion, Thorn gets too close to the truth and is targeted by the same killer who offed the mogul. He discovers that the mogul was killed by order of his fellow company executives, because he was threatening to tell the world ‘the truth’. Turns out the conspiracy behind Soylent Green goes all the way up (at least) to the Governor, who first ordered Thorn to lay off the case, then ordered the hit.

In his relentless quest to solve the mystery, Thorn stows away on ‘garbage’ truck used to collect the many dead who litter the city streets every morning. When he gets to the disposal facility, Thorn learns the truth: Soylent Green is not algae at all. The corporation is actually recycling corpses. No wonder the stuff provides such perfectly balanced nutrition – and tastes good, too!

The dystopian story has a suitably dystopian ending: Thorn is caught spying and hauled away by government thugs, presumably to be silenced, once and for all. But on his way to his dark destiny, Thorn looks desperately into the camera and shouts, “Tell everybody! Soylent Green is people!”

Here’s the kicker: The movie is set in the year 2022 (!). You may have noted that, in the story, the city of New York has a population of 40 million. In reality, NYC’s population is currently about 8.4 million. So many of the extreme consequences of the overpopulation Harrison envisioned have not (yet) kicked in. But many of the climatic and social ills Harrison predicted in his original book have already taken hold in the real world.

The plot feature involving the killing of a character who knows too much and might squeal, is about as old as Shakespeare and just as classic. Remember how old Polonius got stabbed in the arras in Hamlet? Never a borrower or a lender – nor an eavesdropper – be. And curb your curiosity. It’s a great premise in which to root the darkness of the tale.

The irony of Soylent Green was not lost on the seaweed pushers who created a Spirulina-based protein powder supplement of the same name back in 2014. As far as we know, the product was made of the abundant algae and not – we earnestly hope – recycled people protein. The substance got a lot of launch media coverage but a search this morning turned up no sign of it anywhere on the known internet.

On the other hand, another supplement, which is also billed as a meal replacement, has sort of taken over the irony load. Soylent is a soy-based powder containing ’39 essential nutrients’ sourced from the shelves of chemical and additive suppliers. It’s a beverage – supposedly like Boost or Ensure, or any of the many other beverages, bars and powders sold at ‘health food’ stores. Soylent is not currently one of the sales leaders in its sector. But – in our case, at least – it’s the irony that counts.

One of the trademarks of irony and satire (which Soylent Green and our current climate crisis are definitely not) is exaggeration for effect. But there’s no exaggeration in the dark, desperate warnings coming from climate and economy experts about our food future. I find it eerie to note that Harrison, in his original story, foresaw a division of all humanity in the developed word into just two castes: the ultra-rich and everyone else. In our world, in 2021, the so-called top 1 percent already control the bulk of the world’s wealth and rest of us are already starting to have to scramble for the crumbs that are left to us. Harrison’s link between the climate crisis and the self-serving greed of the rich cannot escape anyone’s notice.