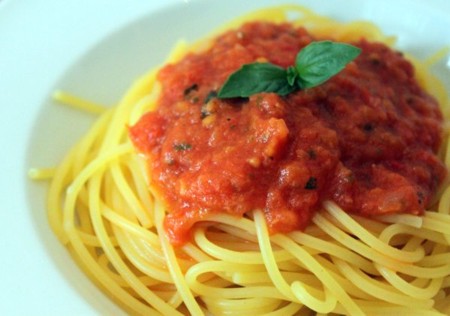 Tomato based Sauces are a staple of Spain, Southern France and Italy. They also figure prominently in the cuisines of India and Asia.

Contrary to popular belief, Tomatoes are native to the New World. They were “discovered” by the Spanish Conquistadors in the 16th century and subsequently spread by them to Europe in the West, and to Asia in the East via the Spanish presence in the Philippines.

The simplest, easiest Tomato sauce you can make is basic Marinara. It’s just Tomatoes, Garlic, and Onions, in proportions of your choice, with Salt and Pepper, simmered for a few hours then passed through a fine wire sieve to remove any lumps. I like to give my Marinara a whiz with a stick blender before sieving it. That makes the finished product thicker, smoother and more full bodied.

My personal Marinara recipe includes chopped fresh Thyme, Oregano and Rosemary, and a dash of Balsamic Vinegar. Play with Marinara and perfect your own signature Italian Sauce!

It’s like preparing to make Espagñole, except that the bones must be from Pork. Ham bones are traditional. Two large ones with some of the meat and fat left on will do nicely. You can daub them with Tomato product if you wish.

Mrs. Indovina, who lived across the street from my family when I was little, used to put the bones on at about 350 F and then go out to 6 a.m. Mass at St. Dominick’s. By the time she got back, they were perfect.

Into her biggest soup pot, pre-heated to medium low, she put three diced Onions, a head of Garlic (peeled and minced or pressed) and half a pound of diced Pork Belly. (You can use any Salt Cured Bacon product.) Then she added half a cup of Olive Oil. She waited until the pork fat was well rendered out and the veggies were soft and aromatic. Then she added the roasted bones and about eight litres of Tomatoes.

She used to start with fresh, ripe Italian Plumb Tomatoes, crushing them by hand and sieving out the skins and seeds. You can simply use two large (100 oz.) cans of Crushed Tomatoes.

Okay. This is as good a time as any to discuss the pros and cons of canned versus fresh vegetables.

Fresh veggies – unless you grew them yourself or got them from a local farmer’s market – are picked unripe in the far-off climes where they are grown. It takes up to two weeks for “fresh” Tomatoes, Sweet Peas, Green and Yellow Beans and other delicate produce to reach your supermarket from Florida, Arizona or California by truck; much longer from Chile, Argentina or Asia by ocean-going container ship.

Canned Tomatoes, on the other hand, are picked ripe and canned within a kilometre or so of where they grow. All their vine-ripened goodness is retained under hermetic seal until you bring out the can opener. And they are much more convenient than Mrs. Indovina’s way, even if they aren’t blessed with all that Mother’s love!

It’s the same with Kernel Corn, Green Peas and other frozen veggies. They are flash frozen within hours of being picked and their field fresh flavour, colour and nutritional value are locked in.

Now, you wouldn’t want anything but a nice slice of red, ripe Beefsteak Tomato on your best burger, or anything short of that perfect cob of Peaches ‘n Cream Sweet Corn at your summer cookout… But seasonal treats are only treats when you get them fresh-picked, locally, in season!

While you’re waiting for summer…

…You can finish off your Red Gravy.

Once the Tomatoes are in the pot, you should add two or three 6 oz. cans of Tomato paste. You also want to add a Bouquet Garni (if using fresh herbs) or a Sachet d’Espices at this point. For Red Gravy, you want to use Oregano, Thyme and Rosemary, with a couple of Bay Leaves, all bundled up like a little bouquet with a piece of cotton kitchen string or heavy sewing thread. (Do NOT use plastic string!) You can use dried herbs in the Sachet, which is nothing more than a little cheesecloth package tied up with string. It should remind you of a big tea bag.

After three or four hours of simmering, remove the bones and the herbs, whiz the remaining sauce with a stick blender (or batch it through a bar blender or a food processor) and then pass it through a sieve to eliminate any remaining lumpy bits.

Bring the sauce back to the simmer again and add Salt, Pepper and Sugar to taste. Yes, Sugar. A spoonful of sugar will take the hard acidic edge off the dominant Tomato flavour, letting the rich, complex umami flavours underneath shine through. Now is a good time to add 6 to 8 cloves of garlic, peeled and minced (or pressed), and a tablespoon or so of Balsamic Vinegar. Stir well. Now turn it down to Low and leave it alone until it’s time to sit down to dinner.

Yup. This is a lot of work, but the secret is to make a big batch as described. You’ll end up with enough sauce to last you a couple of months, bagged in zipper freezer bags in half-litre portions and stowed in the back of your freezer.

Bolognaise, or Meat Sauce is, for practical purposes, a Marinara or a Red Gravy with ground meat added. I’m told it’s traditional to brown off the ground meat first and pour off any excess fat that renders out, I also know that some folks just add raw ground meat to Tomato Sauce and let it simmer. You can use Ground Beef, ground Pork or ground Veal. A meatball-like mixture of Pork and Beef is preferred by purists. Some (like me) also use mild Italian Sausage meat, which adds its distinctive notes to the overall flavour symphony.

An offer you shouldn’t refuse

So, like the lady says, you should make the Red Gravy. You’ll be glad you did. And your family will be glad, too. Capice?

And always keep a few small cans of crushed Tomatoes and Tomato Paste on hand for quick Marinaras!

In Sauces Part VIII, we’ll enter the exotic realm of the “-aises” – Hollandaise, Bernaise and Mayonnaise!