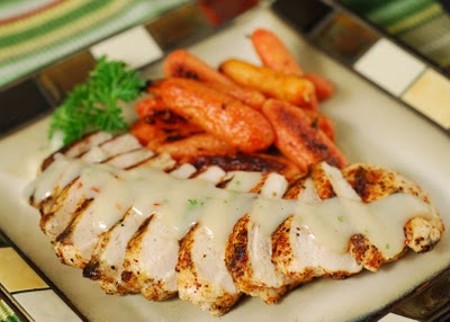 Veloutés are light, silky, sauces based on the light coloured and delicately flavoured stocks made by simmering raw (un-roasted) veal or poultry bones, fish bones or crustacean shells, or your favourite blend of aromatic vegetables.

We’re back in the same basic culinary district that we were in when we visited Béchamel territory. But in this case, we start with stocks which have been previously prepared, as described in Sauces Part II, rather than milk.

As with Pan Jus and Jus au Lié, we want to enrich and thicken our stocks to form a velvety, flavourful sauce.

A bad pun, I know. But it’s time to discuss thickeners in greater detail.

We’ve already seen how the starch in flour can thicken the pan juices from your Sunday roast. The starch absorbs water from the Jus and becomes sticky and thick. We’ve also seen how flour can thicken almost any liquid when it is prepared as a Roux, cooked with an equal weight of fat or oil.

But there are other starches we can use in place of flour. In fact, these “flour substitutes” are the primary thickeners used in many parts of the world where wheat is not traditionally a major player in the local diet.

The most common alternative thickener in Western cuisines is Corn Starch. Corn Starch must be dissolved completely on a cold liquid (water, White Wine, Milk, etc.) before adding to hot liquid, to avoid formation of lumps. This is called a “slurry”. A couple of tablespoons of Corn Starch dissolved in a few tablespoons of a cold liquid will thicken 1 L of stock to a light-medium consistency. Where Flour will produce a sauce that is opaque (can’t be seen through) and may have a whitish, milky caste, Corn Starch produces a translucent sauce, as clear as the liquid on which it is based. Corn Starch thickens immediately upon contact with the hot liquid. You should always stir continually while adding the Corn Starch slurry in a thin, steady stream. Keep adding the slurry slowly and stirring until the sauce reaches the desired thickness.

Arrowroot is used extensively in Asian cooking. It is employed in almost exactly the same way as Corn Starch and the results are similar. While plentiful and easy to get in China, Southeast Asia and Australasia, Arrowroot is not always easy to find in the West and, when you do see it, it is relatively expensive.

Potato Starch is another common flour substitute in Asia. As a thickener, Potato Starch works more like Wheat Flour than Corn Starch or Arrowroot. You can add it to hot liquid as either a slurry or as a Roux made with a fat or oil appropriate to the dish you are making. It takes time to thicken and needs simmering time to cook out its initial starchy flavour.

Variations on the theme

Veloutés give rise to almost a dozen different classic Daughter Sauces. The ones you may already have heard of include…

Add Lemon Juice, Egg Yolk and Cream to Veal Velouté and you get a classic Allemande Sauce.

Add a spoonful of Tomato Purée to any Velouté and you get an Aurore Sauce.

And finally, Suprème Sauce – perhaps the best-known Velouté Daughter – is made by adding sautéed Mushrooms (with their cooking juices) and Cream to Chicken Velouté.

Other Velouté Daughter Sauces go by exotic names such as Hungarian, Venetian, Poulette and Albufera. You can find specific recipes for these and other Velouté variations on the Web. Once you get used to the Velouté technique, you’ll be adding your own Daughter Sauces to the list!

Tune in again soon for Sauces Part VI, in which we look into the specifics of Espagñole Sauce…