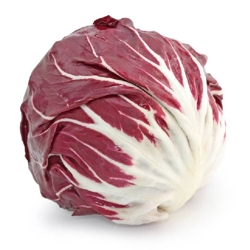 We’ve recently looked into pedigree of the Lettuce Family. Now, it’s time to look at some other popular Salad Greens. We’re going to start with a group of small, leafy-headed plants which look similar in some respects but have subtly different colour and flavour characteristics… 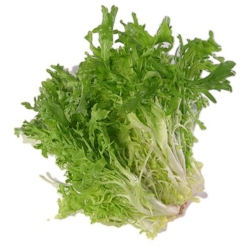 When a lot of folks hear that name, they immediately think of the frilly-edged leafy green that’s prized for its light, slightly bitter flavour and id usually and tossed into Salads. But there are three Vegetables which carry its name and which are very different. One, Belgian Endive, is not related to real Endive at all. But it looks as though it should be. (See Chicory, below.)

Broad Leaf Endive, commonly known as Escarole, can be deep to medium green and grows in loose heads. Curly Endive (also known as Frisée, pictured left), looks like a light yellow-green Afro hair do; light, lacy and prized for its unusual appearance. Makes a real splash in Salads! broad Leaf or Frisée, Endive is a nice, bright flavour to blend into a Salad, Soup or Stew. But it’s too harsh, for most palates, to go solo or layer onto a Sandwich.

Say ‘Chicory‘ to anyone you can find over the age of 60 or so and they’ll probably tell you about how their parents used it in place of un-affordable or unavailable Coffee during the Depression or the Second World War. It used to grow wild in many places back in that day.

But it’s a popular Salad veggie these days and folks often mistake it for something else – Broad Leaf Endive or Escarole – which, as noted above, are basically the same thing.

As mentioned above, Belgian Endive is actually a popular form of Chicory. It’s a tight, light yellow, oblong bundle of crispy leaves often mistaken for Broad Leaf Endive and Radicchio.

The flavour is slightly bitter and refreshing. Like it’s buddy, Radiccio, it’s often served braised or grilled as an appetizer in high-end restaurants. It responds well, in that application, to herbs and Olive Oil!

Radicchio is really a member of the Chicory family, but is usually dealt with as a separate entity. It comes in round and oblong varieties and is usually available as a tight red bundle of crispy leaves with distinct white veins.

You can sautée it, grill it or braise it as well as using it in a salad. Adds great colour to a mixture of greens as well as a nice crunch and a mild, bitter flavour. This particular variety of Chicory is sometimes called Italian Chickory – hence the fancy name.

The worlds of Chicory and Endive are inextricably intertwined. Enjoy them all and don’t worry about the genealogy. As always, it’s the flavour, colour and texture that count!