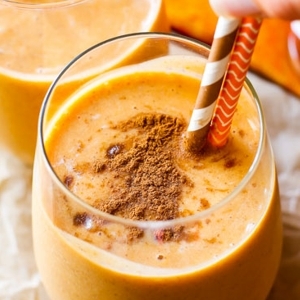 Pumpkin Pie Spice (PPS) has taken over the foodie world like no other fad in living memory. As I said in a previous post, it’s everywhere this fall. But I have come across some really good implementations of PPS which I’d like to share with you now. And some don’t even involve Pumpkin! 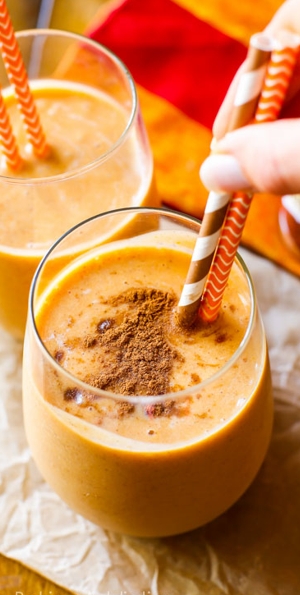 The first PPS delicacy I have for you is the Pumpkin Pie Shake, pictured, left. There’s a restaurant in Toronto – the Lakeshore – that has something similar, made with Apple Pie, which I think must have inspired this one. You take a slice of Pumpkin Pie, crust and all, and stick it in a blender. To that, you add a scoop of Vanilla Ice Cream and half a cup of Whole Milk. Whiz the living daylights out of it, adding more Milk if you want to thin the mixture down a bit. Add some Sugar Syrup if it’s not sweet enough for you. Garnish with more PPS. I leave the eternal straw-or-spoon decision up to you.

I just tried this one myself: Sprinkle PPS generously over a slices of Butternut Squash, along with Salt and Pepper, before Buttering and baking. All I can say is, you gotta try it!

Think of PPS as a thing that can transcend Pumpkin. On the advice of a trusted colleague, I’m going to try it in my next batch of Banana Bread. Imagine a flavour blend using Brown Sugar, PPS and Lemon Rind as a light rub for Chicken or Fish on the grill. Try PPS in your Crumble, Cobbler or Crisp Topping. Use PPS in your French Toast dipping mixture. Use it in plain Pancake Mix. PPS loves Butter and Maple Syrup!

I’ll leave it to your fertile imaginations… Have fun and enjoy!