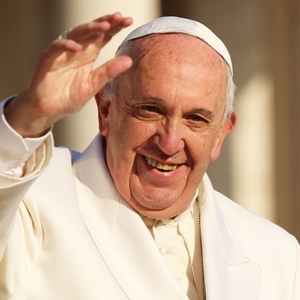 Pizza In Honour Of Saint Teresa

Here’s something different: We all know, by now, that Mother Teresa of Calcutta, founder of the Sisters of Mercy religious order, was canonized a Saint over the weekend. But the real story, for me, is the special gesture Pope Francis organized to celebrate the occasion with the poor… 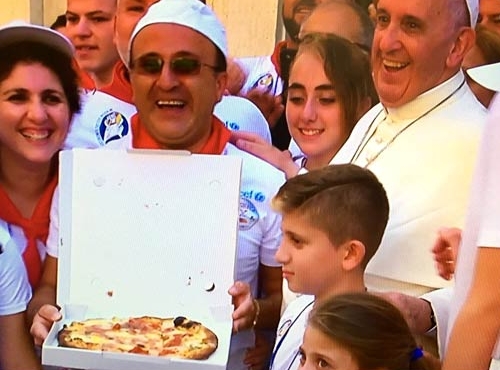 The Pope with an unidentified Pizzaiolo from Naples who brought in three mobile Pizza
ovens and 20 friends to make pizza for 1,500 residents of Sisters of Mercy
hostels for the poor across Italy, Sunday at the Vatican.

The Pope was known as a people’s priest in his troubled homeland of Argentina, often seen riding a motor scooter around Buenos Aires on his daily business. He ministered to his country’s poor people and chose to reign as Francis, in honour of Saint Francis of Assisi, who also championed the poor. The aims of both Francis’s resonate strongly with Saint Teresa’s career in India.

To mark Teresa’s canonization , the Pope had 1,500 poor people bused in, some from every one of the Sisters of Mercy hostels in Italy. They got a ringside seat at the ceremony in St. Peter’s square and later were treated to lunch by Pope Francis.

Lunch consisted of freshly-made Pizza, prepared by certified authentic Pizzaiolos from Naples, the officially celebrated birthplace of Pizza. The 20 chefs brought three mobile Pizza ovens to the Vatican for the event. The people being feted were served by members of the Sisters of Mercy and the male order which is affiliated with them.

Pope Francis still has the ability to make is smile, when he reminds himself of his own roots.

I hope the Pizza they served was the classic Margarita, my namesake.

2016-09-05
Previous Post: When You Eat Supper Is Now Important
Next Post: Do You Trust Your Food And Your Farmers?