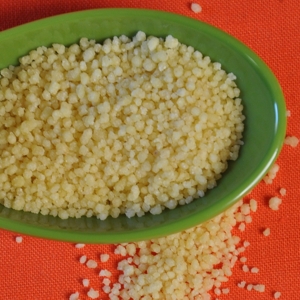 As Pasta is to Italy, as Rice is to Asia and Spain, and Potatoes are to Europe and the New World, so Couscous is to the people of the Western Mediterranean, most especially, North Africa. And this simple, delicious peasant food staple has its own unique secrets for you to discover! 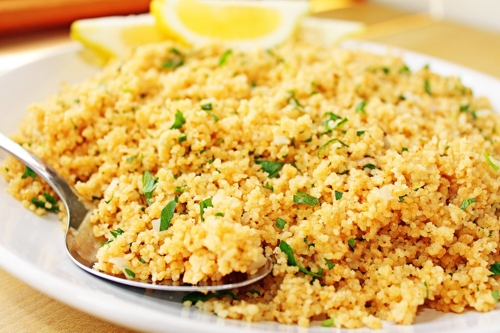 Classic Couscous, made with Chicken Broth and garnished with Chopped Cilantro.

When is a Grain NOT a Grain? When it’s a Pasta!

Couscous is a uniquely placed starch, in that it comes in tiny grains but is really Pasta that has been cooked, dried and milled down so as to cook as quickly as possible. That’s always been a consideration in North Africa and Southern Spain where this delicate fluffy dish is eaten with all manner of meat and veggie dishes. In those parts, the climate is arid and fire wood is scarce. So, they cook with as little wood as possible and as fast as they can!

That’s one reason Couscous is so easy to cook!

Just put one measure of dry Couscous in a large mixing bowl. A material like glass or plastic that does not conduct heat too well is best; it will help the Pasta cook.Then add two measures of boiling Water, Fruit Juice or Soup Stock. Whatever flavouring goes best with whatever you’re planning to serve the Couscous with. Whatever the liquid is, it must be at a rolling boil.

After that, just stir, cover and set aside for 20 min. The heat and moisture will take care of the rest. After all the water has been absorbed by the Couscous, fluff with a fork like you would rice and serve.

You can serve Couscous by itself as a side dish, or fold in dried fruits such as Raisins and Apricots – a favourite version in Morocco. You can also add spices to the broth when making it. Turmeric is a favourite. In Spain, they favour Saffron. In Tunisia and environs they might want to use Ras al Hanout – the ubiquitous Spice Blend that forms a cornerstone of their regional cuisines.

Have it however you like it – but DO try it! Couscous will open new doors for you wherever you would normally just default to Rice, Pasta or Spuds!