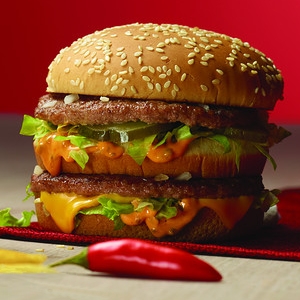 When I read the story about McDonald’s new Sriracha Burger, I asked the same questions the author did. Why have they waited so long to jump on the Sriracha bandwagon and how much Sriracha could they put in a Burger Sauce and still keep it acceptable to the mainstream? 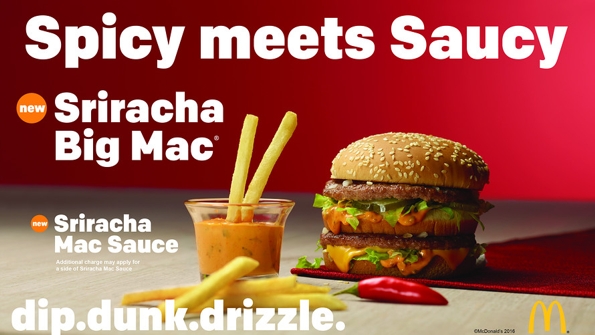 The Sriracha Big Mac is not only a first for McDonald’s because it’s their first foray into the super-hot territory, it’s the first time they’ve tinkered with the famous Big Mac Sauce. And they’re saturating a fairly large test market in the heart of middle America with the new menu item in hopes of finding out if ‘super hot’ is what folks want.

They’ll soon launch a limited-time test of the Sriracha Big Mac at a network of 128 locations in Central Ohio, the same spread on which tested the three-size Big Mac Family earlier this year. The Sauce will also be offered as a dipping sauce which can be requested with any McMeal. McDonald’s floated a small test market for the Sriracha Burger on the West Coast earlier this year. Californians and Washingtonians are widely seen as folks with more adventurous palates than average. They literally ate it up.

My own take is that a Spicier Big Mac would probably appeal to the young and trendy who have been targeted by chains like Five Guys and The Works here in Canada, and Shake Shack and Smashburger in the U.S. Yes, McDonald’s has to do something to rope-in the up and coming mainstream Burger buyers who might otherwise stray off to the new, trendy Burger joints or it will continue to face static or dropping sales. The burger giant has reported basically static sales through this calendar year, in spite of a number of promotions and the launch of All-Day Breakfast.

Maybe the fractionation of the Burger Market is just something the big chains will have to get used to, and change their business models to accommodate and survive in the 21st century…