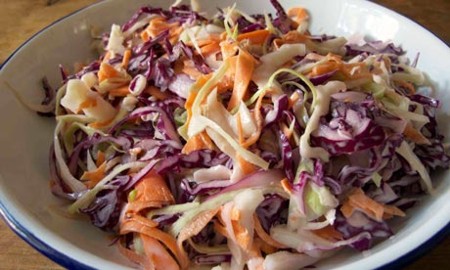 By: Maggie
In: Comfort Food, Cooking 101, The Smokehouse

The perfect accompaniment to Carolina Pulled Pork or any BBQ feast, this Slaw elevates itself above the ordinary by adding a few unconventional flavours and colours to the traditional Green Cabbage formula.

Here’s a classic coarse-cut Confetti (a.k.a. “Rainbow”) Cole Slaw. The colours
are just right, compared to my signature Slaw, but I tend to grate the Carrot,
rather than slivering it. This pic illustrates exactly the way your Slaw
should look, with the perfect, gentle coating of dressing.

What is Cole Slaw, really?

Well… Lemme see… A lot of folks have a lot of different, yet “definitive”, opinions on that subject.

But Wikipedia has a pretty comprehensive definition that doesn’t take pages and pages to express (or justify):

Coleslaw, sometimes simply called slaw in some American dialects, is a salad consisting primarily of shredded raw cabbage, which is dressed with buttermilk and mayonnaise in some variations and dressed with vinegar and seasoning (without any dairy or mayonnaise) in other, lighter variations. Cream or sour cream may by used as the dressing and vinegar may be added. It may also include shredded carrots as well as other fruits and vegetables such as apples, onions, radishes, and peppers. Horseradish, seeds, and various spices may be included.

My signature recipe draws on certain elements of that collective wisdom as well as my Mom’s family-recipe dressing. And I’ve experimented for years, refining my own refinements.

The skinny on my big, fat Slaw

Here’s the basic recipe for my Confetti Cole Slaw…

(This makes quite a pile of slaw, so you may want to scale down the quantities.)

Run the first three ingredients through the grater attachment on your food processor or stand mixer. Or, as I prefer, grate only the Carrots and thinly slice the Cabbage quarters by hand for longer, thinner shreds.  Blend them all together in a huge steel bowl with your own dextrous digits until the three colours are intermingled intimately – like a bowl full of confetti. Or excelsior. Or a rainbow. Or something. You get the idea.

Mix the remaining ingredients together in a large steel bowl and whisk until smooth and all the additions are thoroughly and evenly blended with the Mayo.

Add dressing mixture to the shredded veggies and toss (with your hands, again, if you like; or with a big slotted spoon) until the veggies are just nicely coated. You definitely don’t want the veggies swimming in sauce!

Unlike leafy green salads, you can benefit from putting together your slaw a few hours (or even a day) ahead of serving time, allowing it to rest under refrigeration til needed. The dressing flavours will mix and meld and mellow and make friends with the veggies. As you turn the slaw mass over with that big spoon every once in a while, the dressing will turn a beautiful shade of pink. There. That’s one of my Secrets. (Don’t get greedy!)

No the Sauerkraut has not turned sweet. It’s just my German Style Cole Slaw dressing recipe. It’s a vinaigrette-style dressing that owes a lot to a collection of Cabbage-loving European cuisines.You can serve it hot or cold.

And, again, it makes a lot of dressing, so scale accordingly.

Mix together the following ingredients and whisk til all are thoroughly blended and the oil and vinegar no longer have separate entities in the bowl:

Once you have this basic vinaigrette mixed up, decide whether you like it sweeter or more sour and adjust accordingly. Bring to simmer and stir until all the sugar and salt are completely dissolved. Whip with a whisk until the oil is completely incorporated into the other liquids and the solids are even blended. As with the creamy version above, this is just a starting place for you to develop your own signature blend. For example… I use neither Lemon Juice not Vinegar in mine, and what I do use instead also replaces a part of the brown sugar. (From here, you’ll have to use your imagination. That’s all you’re getting out of me!)

Use this sweet-sour mix on the same Cabbage and Carrot veggie blend described above. As with the creamy dressing, you can put the slaw together hours or a full day before serving time and hold it under refrigeration. To mingle and marinate merrily away.

Onions are often prescribed for a vinaigrette Slaw – Red Onions, thinly slivered are traditional and add that red flare to an all-Green Cabbage Salad. Some insist that all creamy dressings need finely chopped Green (Spring, Scallion) Onions. I don’t subscribe to that theory. The Onions will fight with the Cabbage for flavour supremacy. and I like simple, clean flavour profiles.

Yoghurt or Sour Cream instead of Mayo? Sure! Especially in European-themed Slaws hailing from, or celebrating cuisines that don’t traditionally do Mayo. Or, think Greek, or Middle Eastern for fresh inspiration!

A lot of folks these days, particularly the adventurous chefs looking to put a new spin on old favourites, are advocating the use of grated Grannie Smith Apple along with the Cabbage of your choice, Carrot optional. I’ve tried it. Se what you think. Make sure to grate the Apple late in the process so that it gets coated with the dressing ASAP. Otherwise, it will surely brown off and make your slaw look… old. No, I’ll say it: Stale and yucky! Or immerse the grated Apple in a bowlful of cold water with a couple of tablespoons of Lemon juice in it. This is an old Chef’s trick to prevent Apples (and other “white” fruits and veggies) from oxidizing.

Some folks like to add sliced or chopped Manzanilla Olives (the mild little Spanish ones) to their creamy Slaw dressing. I don’t think the flavour goes well with the other ingredients. Some also say to add chopped Sun Dried Tomatoes to either the vinaigrette or the creamy style dressing. I find they get lost in the aggressive flavour profile of the vinaigrette and may be too sharp and intrusive in the more delicate balance of the creamy mix.

That’s about it for Cole Slaw. If I said more, I might put ideas in your head that would put a damper your imagination or narrow your creative vision. Have fun with Slaw and don’t be afraid to experiment. What flavour do you like best with Cabbage? Okay! So, go for it!

If you want a great Slaw and don’t have the time, or the ingredients on hand, or the inclination to do all that shredding, just call us! We make it every day! And we’ll be glad to send some along with any of our BBQ Lover’s or Pork Lover’s Platters…