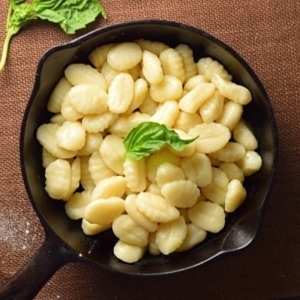 Have You Tried ‘Noc & Cheese’?

I got inspired by a post on a recipe site I subscribe to and took an idea of theirs a step further. Just about everybody knows and loves good old Mac & Cheese. But this food-forward site is noted for thinking outside The Joy of Cooking and making unusual ingredient matches… 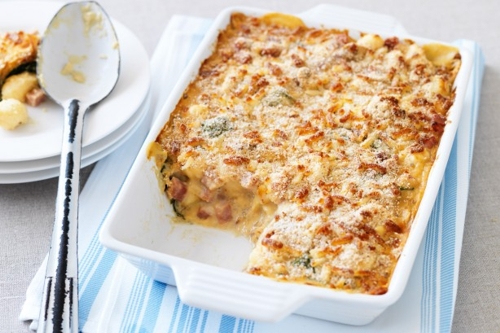 A beautiful Gnocchi & Cheese Bake with Ham and Veg additions…

I love Mac and Cheese and, in previous posts, I’ve advocated for changing up ingredients to elevate the dish from everyday to ‘feast day’ fare. Specifically, I suggested trying different short pastas in the dish. Penne Regate, Fusili, Rotini and similar pastas will make the dish more interesting all by themselves.

Then, there’s the almost infinite list of things you can add to your Mac & Cheese… Ham Cubes are popular, as are Mushrooms. Sun Dried Tomatoes are a nouveau kick as are small florets of Broccoli and Cauliflower. The latter are great, in as much as they are fun to eat and give you a substantial serving of veggies amid all the carbs and dairy

But the post I just saw, which goes in the Cauliflower/nouveau direction, did all my previous notions one better.

How about changing up the old, tired Elbow Macaroni in your Mac & Cheese for light, fluffy Italian Gnocchi dumplings? Sounded really good to me! Here’s a recipe for traditional (i.e.- ‘simple’) Gnocchi, which I adapted from the one Mrs. Indovina taught me when I was 12:

We’re actually making a Pasta, here, but the major ingredient is Potato in place of most of the Flour or Semolina. The method is very similar to pasta.

Bake the Potatoes until fluffy or boil as for Mashed Potatoes. Spoon the Baked Potatoes out of their skins or mash the Boiled Potatoes, as appropriate. Do not add liquid or butter to the Potatoes

In a big bowl, combine Potatoes, Egg (beaten) and Cheese. mush them together with your hands until just combined. Don’t turn the Potato into a purée.

In a smaller bowl, combine Flour, Salt, Pepper and Nutmeg. The original recipe calls for 00 Pasta Flour or Cake and Pastry Flour, but All Purpose will do. I just like the lighter, fluffier product you get from Pasta Flour. Whisk these ingredients together well.

Add Flour mixture to the Potato mixture and knead until you have a nice, soft, uniform Pasta-like texture. Add the Flour in several additions, and stop adding when you feel the Gnocchi dough firming up. You want it to be firm enough to roll but not too firm; the Gnocchi will come out heavy and dense. Yuk. Knead for a few minutes just like regular Pasta.

Now form the Gnocchi Dough into a ball and wrap in plastic wrap. Let it rest for 15-20 minutes before forming the Gnocchi. This should be just about enough time to get a pot of boiling water going on the stove.

To form the Gnocchi, flatten the ball to about 1 in. (2.5 cm) in thickness. Then, cut it in six or eight even pieces. Roll each piece into a snake about 1/2 in. (1.5 cm) in diameter. Now cut each snake into 1/2 in. (1.5 cm) nuggets. Italian ladies spend a lot of time rolling each nugget off the back of a fork or a Gnocchi maker. I usually just lightly press each one with my thumb. Don’t flatten them out, just thin them a bit in the middle so they’ll cook evenly.

To cook, drop the Gnocchi in boiling water until they pop to the surface, fish them our with a slotted spoon and set aside. Do them in multiple batches, if necessary, to avoid crowding the pot and lowering the water temperature from a rolling boil. It doesn’t matter if they cool off. They’re going into a casserole, anyway!

And remember, you can double or triple this recipe and freeze a pile of Gnocchi for later. They’ll last for months in the freezer and up to a week in the bottom of the fridge, tightly covered.

Go ahead and make your Mac and Cheese, substituting the cooked Gnocchi for the usual al dente Pasta. Bake for the same amount of time and enjoy…

2016-05-01
Previous Post: Are You Ready For ‘Alternative Proteins’?
Next Post: The Strange Tale Of La Signora Indovina…