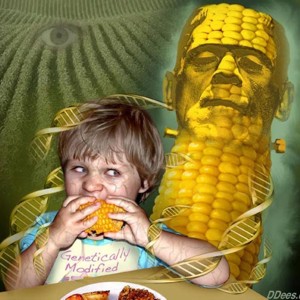 I don’t usually comment on posts about Genetically Modified or Genetically Engineered foods. I stated my position ages ago. But, occasionally, I feel the need to re-state my position in support of GM/GE foods – in some cases. And that includes an explanation of what GM/GE actually is… 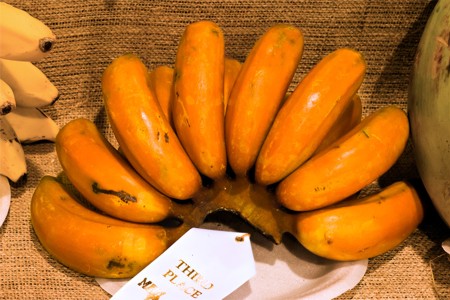 Natural Orange Bananas – prizewinners at the 2011 Maui Agricultural Fair in Hawaii.
So… The Orange Banana isn’t exactly new – and may not need to be man-made!

Before we examine the specific case of the newly-engineered Orange Bananas, let’s recap the history of genetic manipulation…

The only reason we have the high-yielding grains, pulses (beans) and other foods that make our current culinary and nutritional lifestyle possible is that farmers and (more recently) scientists have been manipulating the genetics of both vegetable and animal ‘crops’ for thousands and thousands of years.

It all started with selective planting and propagation, by humans, of plants beneficial to humans. Things that taste good and keep you healthy naturally take precedence over things that taste bad, are not so nutritious or take more work to produce. On a narrower scale, certain types of corn or wheat are promoted for their desirable qualities (often including high yields, disease resistance or pest resistance) and other strains are left to fend for themselves and become what we now call ‘ancient grains’.

The same thing happened when humans domesticated animals for food.

The principle is called artificial selection (as opposed to Darwin’s theory of Natural Selection, where chance mutations and natural advantages determine which species prosper and which die off). Gregor Mendel figured it 150 years ago.

Even now, breeders deliberately cross the biggest, strongest bulls with the highest-producing cows to create (throwbacks notwithstanding) even better-producing milk cows. Same with our meat animals. Producers seek to breed hogs and beef cattle which yield more and leaner meat from less feed in a shorter fattening time.

What separates this kind of traditional genetic manipulation from what activists now call GM/GE is that humans have come one step further in their attempts to control the evolutionary development of both the plants and animals we use.

The root of the activists’ objections seems to be that, while some chance mutations and experimental crosses within species work out and some do not, well, it’s still up to nature to determine success or failure. When scientists start inserting genes from other species into plants and animals in which they don’t naturally occur, in attempts to endow those species with qualities and abilities they have no hope of acquiring from others of their line with which they would naturally mate (like insect- and disease-resistance), well, that’s just not natural. And, the activists warn, it might also be downright dangerous.

Now… Where do you draw the line?

Here’s where we get into the Orange Banana controversy, with a vengeance.

It’s not that they’re any more resistant to disease or insect infestations. These new GM Bananas have much more Vitamin A than their already nutritious yellow cousins. And Vitamin A deficiency is one of the most serious nutritional problems in developing nations today.

So… I support Orange Bananas as beneficial. Unless or until proven otherwise.