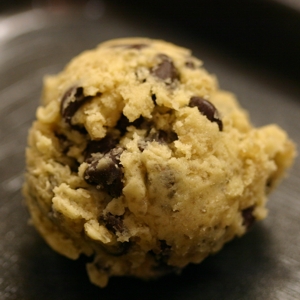 The U.S. Food and Drug Administration this past week issued a warning about – of all the things you’d figure were harmless – raw Cookie Dough. But the statement shows up some interesting associated issues you might not think about if you just read the headline…

A big bowl of Raw Cookie Dough. Do you feel safe eating it as is?
The FDA says don’t even touch it!

No, the Raw Dough warning was not about Salmonella from the Raw Eggs in basic Cookie Dough. It was about E. coli.

The FDA warning was triggered by the discovery of an E-coli infested shipment of Flour at a General Mills Flour factory in Kansas City, MO. The contamination caused a string of E. coli outbreaks in the U.S. last month. The FDA says 10 million pounds of Flour sold under the Gold Medal, Gold Medal Wondra and Signature Kitchen labels was recalled after the source of the contamination was found.

People who got sick all either handled or ate raw Cookie Dough made from the aforementioned General Mills Flours.

Here’s where the unsuspected issues emerge…

It also warned restaurants not to give kids hunks of raw Dough to play with while the family Dinner order is being prepared. That’s a new one on me. But I gather it’s something they do in parts of the land with which I am not intimately familiar.

I imagine that the FDA warning will be taken seriously by folks like Ice Cream manufacturers and Fast Food purveyors who sell desserts containing Cookie Dough. The warning will probably get their customers thinking, too – and probably not good thoughts, either. I imagine that there will be other as-yet-unforeseen consequences of the warning, as well.

What gets under my skin about this ‘warning’ is simply that it applies to all flours made by all milling companies for all uses.

“Eating raw dough or batter—whether it’s for bread, cookies, pizza or tortillas—could make you, and your kids, sick,” says Jenny Scott, a Senior Advisor in FDA’s Center for Food Safety and Applied Nutrition.

In contrast to the FDA stand, such august publications as Slate have criticized the warning as ‘unrealistic and alarmist’.

So what should we all do?

I guess it’s best to be safe than potentially sorry. But I’ve been cooking and baking with Flours of all sorts for decades and I’ve never had a problem using Flour for everything from Bread to Sauces. I think, maybe, the old rules should be restated  for those too young to have heard them before or too casual about best kitchen practices to care…

If you’re interested, there’s actually such as thing as Edible Raw Cookie Dough, now. No Eggs, but – Alas! – it still has all the flour.