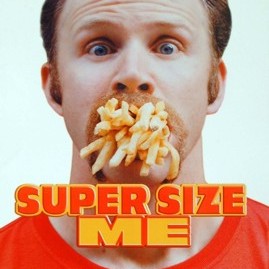 I don’t necessarily agree with everything the Organic movement, the Whole Foods movement or the various stripes of Vegetarians say – especially the more extreme groups. And I think the ‘healthy’ types are overdoing it in their ongoing witch hunt against Fast Food. But… 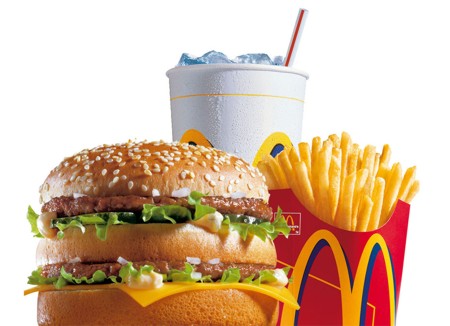 This standard Big Mac Meal contains over 1,400 calories.
(And it’s not even ‘Super Sized’!) That’s three quarters of what the average,
normally active person needs per day to be healthy. (If you don’t believe me,
check out McDonalds own online Nutrition Calculator!)
In the end, it’s your choice.

I’m all for making your own food from the freshest, most wholesome ingredients you can get. But I also understand that many families today can’t afford the time to cook up conventional meals, what with two working parents, all the kids’ programming (sports, dance, music, etc.), and the often desperate attempt to maintain some kind of social life.

So… You either get your Mom to bake up a freezer full of casseroles, cook yourself all weekend every weekend or fall back on the convenience and prep time savings offered by ‘convenience’ foods.

Guess what? The vast majority opt to pull a $20 out of their wallets rather than pull a frying pan out of the kitchen cabinet.

The Organic, Whole Foods, Natural Foods and other movements dedicated to eradicating from the food chain chemical additives, excess Salt and Sugar and Fat, along with chemical fertilizers and pesticides appear to have placed themselves in an adversarial position, opposite the Food Processors and the Big Restaurant Chains.

They claim, among other things, that mechanically-deboned meats (christened by them as ‘Pink Slime’) are unsafe because they are exposed to chemicals during processing. They insist that fruits and vegetables exposed to pesticides and man-made fertilizers during their growth are unsafe. They say losing weight is as easy as eliminating fast food from your regular diet. (Alas, too many of us just replace it with other calorie sources…)

The Medical Community is responding to the cries of the natural Foods sector with a whole slew of studies  which they say show Fast Food is killing us. Again, just a few of the headlines: “”Fast food not only makes you fat, it also contributes to depression”, “New Study Finds Eating Fast Foods Increases Your Risk for Diabetes”, “Doctor urges fast food restaurants to hand out pharma drugs like ketchup packets”. Alarmists. 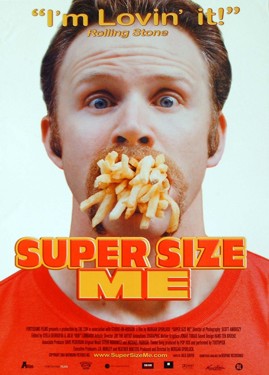 Read the fine printI You’re only really at risk of developing Liver disease from Fast Food if you eat nothing else but Fast Food every day for a month. But you already know that because you all saw indie film maker Morgan Spurlock’s shocking 2004 mini-feature, Super Size Me, in which he did just that. Yes, you’ll get fat, increasing your risk of Type 2 Diabetes if you consume a diet high in fats and carbs and Salt and Sugar and don’t do anything to burn it off – exercise, physical work, physical recreation. Remember, statistics do lie and you can make the results of any study prove your point.

So, what sort of Pandora’s box are you opening when you open the door of your local burger franchise? Or pop that frozen Pizza snack into the microwave?

Restauranteurs, in general, long ago widened the scope of their menus to include the less-exacting categories of vegetarians, offering ‘Vegetarian Options’. Fast food outlets were more reluctant than sit-down eateries to join that trend, but the majority have now added Salads to their bills of fare, at least.

Most restaurants across the board have actively embraced the principle of ‘healthier’ Vegetable Oils and abandoned old-school saturated fats.

But Fast Food purveyors typically serve up larger servings than sit-down restaurants. Their ‘meals’ selections are often unbalanced (notably, very little veg; sorry, Potatoes are a starch). And their attempts to tailor the texture and flavour of their foods leads to an overload of Fat, Sugar and Salt. It’s really that simple. Why do we love Fast Food so much? Because:

1.) ‘Fat is Flavour’, the ancient battle cry of the professional cook since at least the 17th century, when ‘classic French Cuisine’ began to be codified;

2.) A spoonful of sugar helps everything go down; and –

3.) Salt is an essential element for mammalian life as we know it. Mammals are us: People, plus most of the animals we raise for food, specifically those who suckle their young.

Incontrovertible Truth #1: Cooking with fat, especially deep frying, is much faster than baking or roasting. And it can impart a flavour, through browning, that other methods can’t duplicate. And, let’s face it: How long did you stick with those new, healthy oven-roasted Fries or baked Snack Chips?

Incontrovertible Truth #2: When you cook something in fat rather than water, steam or hot air (baking), some (or a lot) of the fat gets absorbed by the food. Even more so if the food is battered or breaded.

Incontrovertible Truth #3: Sugar is added to virtually all processed foods, to make it more palatable and to feed the modern Urbanite’s sugar addiction… Perhaps the most insidious instance of ‘Sugar doping’ by the Food Industry is the addition of the stuff, by the ton, to baby foods, formulas and other products aimed at the youngest of kids. It carries on through childhood via sugary breakfast cereals, mega-sweetened beverages and candy snacks. Finally, one goes through puberty and graduates to Coffee – Double-Double, of course! Gotcha.

Incontrovertible Truth #4:Your body craves Salt. Nothing you can do about it. Your body is conditioned, by millions of years of evolution, to seek out and welcome Salt. This instinctive predisposition to tanking up on salt can be traced as far back as pre-historic times, before we understood the vital role that salt plays in our diet, and we needed a fundamental drive to ensure we got enough Salt to survive. How vital is Salt? It was widely traded as a valuable commodity – even used as money – at least back to the time of the Egyptian Dynasties!

But salt also as another effect, attributable to the evolution of that fundamental drive: Our bodies find foods consumed in the presence of Salt to be more desirable than those without. And the more Salt, the better, especially in  the presence of Fat! French Fries: The Fat/Salt Perfect Storm!

Incontrovertible Truth #5: When it’s machines making ‘food products’ at factories, rather than people preparing food in their homes, there are always some factors manufacturers can’t avoid. First, the people whose machines turn out millions of frozen Pizzas or bags of snacks or burger patties (and other pre-processed ingredients) for fast food restaurants all must bow to the needs of the machine. They must add texturizers and stabilizers to make sure the various ‘mixtures’ they create can pass through all the extruders, moulds and stamping machines without costly jams or inconsistencies in the product.

Manufacturers must also ‘texturize’ to make up for losses that take place when ingredients such as Wheat or Cane Sugar or Honey are taken out of the recipe and replaced with cheaper, easier-to-handle things such as Soy Protein and Corn Syrup. All for the convenience of the machines and to maximize profits. And don’t forget mouth feel. They even add stuff to adjust that crucial aspect of their products. ‘Smooth and Creamy’ is a big mouth feel favourite.

Incontrovertible Truth #6: You gotta have preservatives, added both to the food and its packaging, to ensure the stuff stays salable and reasonably wholesome on the way to the retailer and, ultimately, to your house.

Incontrovertible Truth #7: Fast Food meals almost always contain many more calories than home-cooked ones. Remember Morgan Spurlock? He added it all up and found he was taking in around 5,000 calories a day on his all-McDonald’s diet. The average person needs around 2,000 calories a day to be healthy. Sedentary types, even less. So where does the other 3,000 calories go? Straight to Body Fat!

In the end, it all comes down to your freedom of choice. If you want to eat fast food to excess and become overweight, increasing your risk of Diabetes, that’s your choice. No, really. You can always choose more-healthy alternatives, both in terms of ingredients and preparation methods that take no more time or effort, or maybe just a little more of both, to put a meal on your plate.

We’ve heard about high school kids who go to a mega-chain burger joint for lunch every day through the week, week in and week out. Is anybody doing long-tern studies on these kids to see what this diet might mean in terms of disease onset, obesity and other issues by the time they reach middle age?

Fast food is an okay alternative to better choices when you’re strapped for time; maybe once or twice a week. But make it a treat, not something the kids expect. And emphasize the good things about fresher food that’s prepared closer to home.

I try to share with you recipies that can be made easily and fairly quickly and are wholesome. Okay, I go out on a limb now and then with an paean to Poutine or a series on fancy Sauces. But those delicacies are, respectively, meant to be considered as a treat and used sparingly.

See? Common sense. That’s what it all comes down to.

As Julia Child famously said: “Moderation in all things – including moderation!”