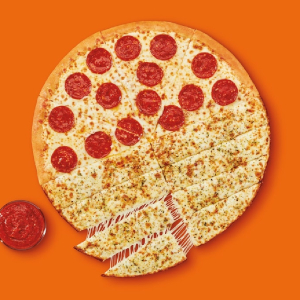 New (limited-time) menu items and cross-cuisine-cultural mashups headline this week’s Fast Food Week lineup. To me, this just means that most of the major players in the take-out and delivery-only category appear in no hurry to re-open for mass dine-in service. School, sports re-ops to date have been disastrous… 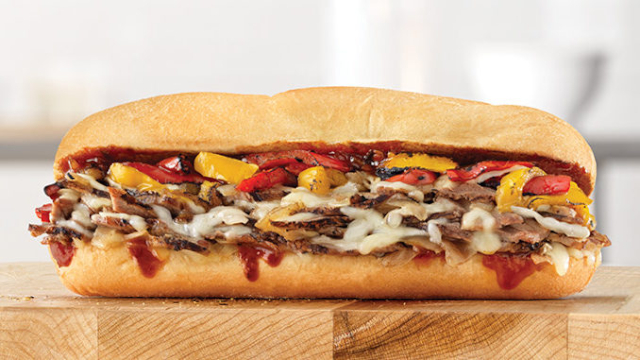 As usual, the official menu item portraits look absolutely mouthwatering. And the official descriptions are just as tempting: Both the Classic Cheesesteak Sammy and the Spicy version start off with long, Sub-style Buns, and add Sliced Prime Rib, Melted Provolone, Onions, and Fire-Roasted Peppers. The Spicy version also adds a Spicy Sauce. One of these massive Sandwiches appears to be more than I could eat at one sitting. Not the first time we’ve had one of those from Arby’s!

Okay. I’ll put down this glaring (to me) boo-boo to the fact that Papa John’s doesn’t have a lot of experience with Tex-Mex menu items. But shouldn’t it really be spelled ‘Papadilla’? No! Because it’s inspired by a famous legacy Sammy, the Italian Piadina, a folded flatbread sandwich that originates in Northern Italy. Anyway… You get Grilled Chicken, Onions, the chain’s Signature Cheese Blend, Buttermilk-Ranch Dressing, and Buffalo Sauce. It also comes with extra Ranch Dipping Sauce.

In yet another attempt to help you vary your COVID-19 lock down menus, Old EL Paso has released a series of new Taco Kits featuring the flavours of the Caribbean, Japan, and Korea (Jerk; Teriyaki; Asian BBQ, respectively). Each kit includes 10 Flour Tortillas, one Seasoning Packet, and one Sauce Packet. The Meat and Toppings are up to you. Fun for the kids; extra easy for you if you were planning an Taco Buffet meal, anyway!

McD’s is launching new Spicy Chicken McNuggets – the first substantial change it’s made in the iconic snack since Nuggets were first introduced to the McD’s mainstream menu, back in 1983. A couple of notable differences between the new Nugs’ and the originals: New Tempura Batter seasoned with Chili and Cayenne Powder, and a Spicy Dipping Sauce called Mighty Hot Sauce, based on a blend of Crushed Red Pepper, Spicy Chilies and Garlic – the chain’s first new Dipping Sauce in three years…

Since there appears to be no other reason for this ‘same-old’ sort of Combo Meal Deal but to promote the chain’s new Secret Recipe Fries, that must be the reason for floating it now. It’s basically the KFC 3-Piece Tenders Fill Up, less the Cookie. Available for a limited time at participating locations U.S.-wide.

Doughnut icon Krispy Kreme is opening a new ‘flagship’ store in New York’s Times Square on September 15 – in spite of the ongoing controversy over COVID-19 resto re-opening, mask protocols and general uncertainty over the future of the foodservice sector. It’ll have everything you could want in a Doughnut shop, including unique pastry flavours and some products that can only be purchased at that location. Perhaps most interesting for kids – and anyone else who loves to peek behind the scenes – is a Doughnut making ‘lab’ where classic KK ring Doughnuts are finished by passing through a waterfall of silky White glaze…

… On what will be making some of us fatter over the days and weeks to come. Back in 7 with a new edition of Fast Food Week!