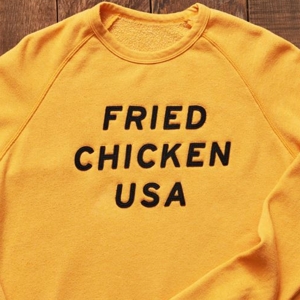 It’s summer time, otherwise known as the crazy season, by out-of-classes kids who love that “the livin’ is easy”. For some Fast Food chains, summer is merger season. Others think ‘Hot’ means it’s Sriracha season. And still others think it’s a great time to launch a new clothing line! 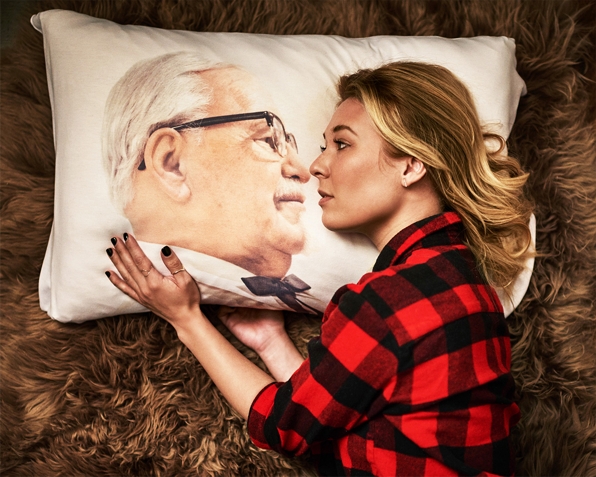 KFC gets warm and fuzzy with clothing line

KFC recently sent a Zinger Chicken sandwich to the stratosphere. And dressed up Rob Lowe to look like the Colonel – in a space suit. Now, after much thought (I’m sure) they’ve launched a limited edition clothing line you can buy online, featuring: A replica of the Colonel’s string tie for (US)$12; Chicken Drumstick motif socks, in red or tan, for (US)$8; a Chicken Drumstick design T-Shirt for (US)$30; and a special Colonel’s Suit T-Shirt for (US)$18. See them (and buy them) at the KFC Shopping website…

But shareholders of JAB Holdings, which owns Krispy Kreme brand, think it’s a great idea. And word is, JAB is gunning for Starbucks with this latest acquisition. All the need is a Coffee line-up that can stand up to Starbucks iconic slate and they definitely have a chance. Panera definitely has the up-scale food.

You like to start your day wit Steak and Eggs? Starbucks is extending its early-shift menu with a new Seared Steak and Tomatillo Wrap featuring real Steak chunks and ‘velvety’ scrambled eggs. The Eggs, Starbucks is quick to point out, are cage-free and you also get Caramelized Onions, and Tomatillo Salsa, inside a warm Tortilla.

While we’re at Starbucks…

We’re told that the upscale Coffee and Café chain was almost named The Cargo House!

In an interview with its hometown newspaper, Seattle Times interview with co-founder Gordon Bowker. With hindsight, he said that name would have been a huge mistake. Another early contender was ‘Starbo’. Close, but no cigar. Then  Bowker remembered one of his childhood stories – Moby Dick – and the name Stasbucks leapt to mind. And that was that. Seems the character Starbuck, in the Book and movie, really liked his coffee.

The test marketing and limited-time roll-outs must have been pretty successful. McDonald’s has launched its Sriracha Mac Sauce, the featured topper for a new a new Signature Sriracha Sandwich. It’s a Chicken Breast ‘Burger’ with Crispy Onions, Baby Spinach and Kale, Tomato, and White Cheddar. The Sauce is also available, for a limited time, to dunk your McNuggets in. If folks love it enough, it may become a mainstream menu item…

Burger King Agentina is giving away 1,000 prosthetic hands to those in need. The hands are manufactured via 3D printing by an Argentinian company called Atomic Lab. Half the proceeds from the sale of each new Stacker Atomic 5.0 Burger will go towards Atomic Labs’ costs. It sounds really altruistic and generous – but let’s keep in mind that it takes two hands to eat a Burger… And we know what kind of Burger artificial hand recipients will be chowing down on!

And that’s it for now… See you all next Saturday for a rundown of the coming week’s biggest Fast Food News!