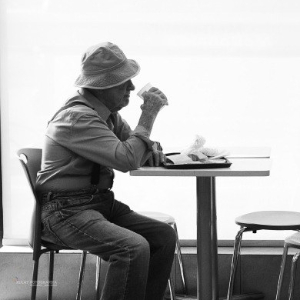 Eating Alone: Could It Be Bad For Your Heart?

From time immemorial, even before humans appeared on the landscape, eating (at least among mammals) has been not just a family but a communal activity. Let’s take lions, for example. After a lioness takes down an antelope, the rest of the pride joins in on the feast. It’s the one time in their daily lives that all members of the family are together. Even the males, who normally spend their time lounging around and looking majestic; while the females hunt, bear the young and care for them.

Early humans were no less dedicated to the ‘family’ system of organization. Except by that time in the great evolutionary parade, the men were accustomed to hunting and the women still bore and cared for the young. Even so, the women were still expected to provide their share of the food by gathering edible plants, nuts and berries. Indigenous people of North America were living like this up to the time the Europeans arrived and began to impress their will and customs on them. When one hunter brought a deer into camp – or a hunting group killed a buffalo, everyone in the village shared in the wealth. Even today, some remote tribes in Southeast Asia and South America still live in this time-honoured manner.

What events do we tend to hold dearest in our own modern lives? Big, special occasion gatherings the ecnetrepiece of which is a large family dinner, feeding not only the immediate family but the extended family; sometimes 4 generations or more at the same table.

If eating together with family, or at least with others we know and whose company we enjoy, was not so fundamental a human desire, would generations of mothers (and fathers) have been so upset when the kids want to eat in front of the TV or fail to show for dinner when hanging with their buds? The need to have everyone around the table together is bred into us.

Living alone – particularly eating alone – has been shown to result in an elevated risk of depression, and feelings of isolation, and a decrease in feelings of overall well being.

The NAMs team has discovered that solo dining can literally be bad for your heart.

As an abstract of the study report explains: “As part of the overall effort to reduce the incidence of CVD, there has been a growing awareness of healthy eating habits; however, the importance of having an eating companion has been largely overlooked in previous studies. Recent changes in society have meant that more people than ever are eating alone. Some of the primary reasons include a rise in the number of single-person households. Social distancing protocols introduced in response to the COVID19 pandemic have further restricted eating meals with others. Additionally, mobile platforms for food delivery services have become more popular, further motivating people to eat alone.”

“When eating alone, people tend to eat faster, which often leads to increases in body mass index, waist circumference, blood pressure, and blood lipid levels, all of which can increase the risk of metabolic syndrome and CVD,” the study report says. The issue is especially important in the case of older, post-menopausal women who live and eat alone. They are also up against reduced estrogen levels in their systems – and estrogens play an important part in regulating the metabolism.

The researchers looked at a group of 600 women aged 65 or over, all of whom were post-menopausal, comparing the cardiovascular health of those who ate with companions to those who ate alone.

Among the team’s findings:

NAMS medical director Dr. Stephanie Faubion says: “This study shows that older women who eat alone are more likely to have symptomatic heart disease. They are also more likely to be widowed and to have lower incomes and poorer nutritional intake. These results are not surprising given that lower socioeconomic status and social isolation contribute to lower quality of life, greater rates of depression, and poorer health. Given that women live longer than men, finding ways for older women who are socially isolated to engage and create meaningful social ties may not only improve their nutrition but also their overall health while simultaneously reducing healthcare costs.”

But the most important finding of the study, for me, is that eating with companions is much healthier for a number of reasons than eating alone. And eating alone is usually a result of some larger life circumstance: the loss of a spouse; the loss of old friends who have died; isolation (on retirement) from those we interacted with every day at work; downsizing into accommodations away from one’s old, familiar neighbourhood and friends; the loss of regular contact with children and grandchildren who have moved away from the old neighbourhood – perhaps to distant cities – usually for career reasons.

As much as the NAMs study spotlights the dangers of solo dining for older women, it would be unfair and improper not to include older men in the at risk group. As the boomers age, there has been a significant rise in the number of single-member households, and the issues facing them have increased in importance accordingly.

We must also acknowledge that, according to previous studies, being alone tends to make folks lazy cooks; that is, they tend to rely more on convenience foods (prepared, processed and take-out) rather than bothering to home-cook a meal just for one. It also leads to a serious decline in the amount of fresh fruits and veggies these folks eat as well as in the general variety of what they eat. That’s all bad for their overall health.

So I say, encourage anyone you know who usually or even often eats alone to join you and your family for dinner. It’ll be good for everyone involved. Does a local church or community centre have a Senio9r’s Dining Club or something similar? Maker sure all the seniors who live alone in your neighbourhood know about it – and the empty-nesters, too, for that matter. And don’t wait for someone to bring in a deer – much less a buffalo!