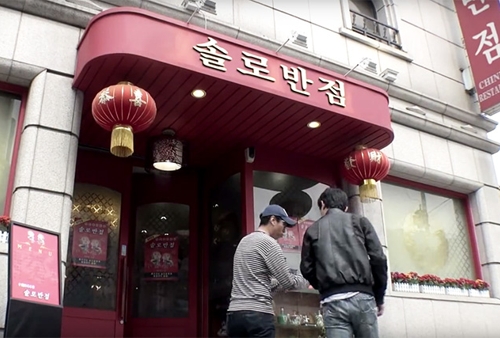 You’ve read, in these posts, about novelty restaurant themes.But now there’s an eatery that caters to the most neglected dining demographic on the face of the earth: Singles. The question is, should the operators of this establishment remain passive purveyors, or actively try putting solo diners together?

A Koren ‘Restaurant For Singles’. Secret, solitary dietary sins are always the sweetest…

The name of the place, located in Seoul, Korea, translates literally as ‘Restaurant For Singles’. Fine. And the servers will faun over you like you were a table of eight. Lovely. Not only that, but the food is good (so they tell me). So what’s the problem? We could use a few of those here, in North America!

It’s prudent to note that restaurants for singles are fairly common across urban South Korea. However, this one sets itself apart from the rest in that its owners and staff have vested themselves with a mission: to put single diners together in surprise blind dates.

You walk in and get seated at your table-for-one. You get settled in and order. You only notice the iPod installed in front of you when it beeps telling you a message has just come in. It’s an invitation to dine with another single who’s also in the restaurant. If you reply, ‘Yes’, a screen beside you opens to revel your blind date. Now what do you say?

Maybe I went to a singles resto simply so I’d get some respect from the staff as a lone mangeur while enjoying nice meal which I don’t have to explain or apologize about to a dining partner. Secret, solitary dietary sins are the sweetest. I’ll have the Bub’s Bad Boy Burger with a giant Diet Cola and a side of extra napkins!

Or maybe I just came off a bad relationship and the last thing I need is someone trying to hook me up. With anybody.

The possibilities are (almost) limitless.

So… How do you say ‘Restaurant For Singles Who Want To Eat Alone’ in Korean?