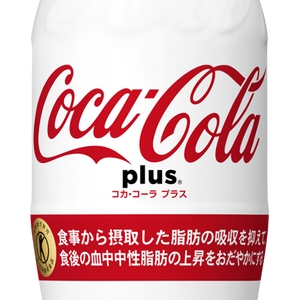 There’s a war on in Asia. Not a fighting war, but a drinking war. It involves ‘healthy’ leisure beverages. And Coke is getting ready to test a new one in health-obsessed Japan, where the pan-Asian tradition of wearing surgical masks in public to avoid germs originated a century ago…https://maggiejs.ca/wp-admin/edit.php

The new product is called Coke Plus – which is, as you might expect, is more than zero, but in a good way. It has zero Calories and zero Sugar, zero colour and at least one ingredient that could actively improve your health.

The special ‘healthy’ ingredient is 5 g of indigestible Dextrin fibre. The company’s website says drinking a bottle a day (with your main meal) might help keep heart attacks away. Dextrin is touted as reducing the absorption of fat from you food as well as moderating the triglyceride levels in your blood. In spite of all the goodness rolled into Coke Plus, the beverage giant insists that you still get all of that ‘real’ Coke Flavour you crave.

But I see a number of negatives that might sink the new brand before it’s actually floated.

Claiming Coke Plus is actually marginally healthy, rather than greatly less-unhealthy, is an iffy sell anywhere except, perhaps, in health-obsessed Japan. I basically have a hard time equating Soda with ‘Health Drink’. Soda was invented in the U.S. by the Great-Great-Godfather of Soda, John Pemberton, back in 1886. North American ideas about Cola are pretty ingrained, probably immutable.

Mimicking bottled ‘healthy’ Iced Teas and Waters by clothing the bottle in an opaque white high-necked plastic sheath is just a cynical marketing attempt to equate Coke Plus with those other beverages, which aren’t sodas at all.

And… Arch competitor Pepsi introduced a fibre-enhanced Cola a few years ago – Pepsi Special – making the same basic claims as Coke plus. And it tanked, due to what consumers called a ‘viscous’ mouth feel – from the Dextrin.

I don’t see Coke Plus flying very high in Western markets, what with the less-than-sterling records of all the colourless Sodas that have come – and gone – before it. Maybe we won’t see this Coke version in North America or Europe at all, where product perceptions and health concerns are markedly different than they re in Asia. Which is not to say that Coke won’t make (US)$Billions selling the stuff in the huge and growing Asian market!

If you’re interested in trying it, you can pre-order from Amazon now. But Coke Plus will not be shipping until next month.