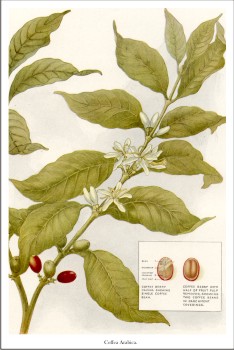 If it wasn’t bad enough that coffee industry watchers were predicting the extinction of java fans’ beloved Arabica strain later in this century (due to climate change), now another scourge is threatening that plant in Central America, source of a lot of our ‘better’ coffee.

Roya, properly known as Coffee-Leaf Rust, is already reducing the quality and yields of coffee from trees in the mountains of Honduras. Much of the coffee we consume in North America comes from that country, as well as from Costa Rica and other neighbouring realms. In fact, the disease has been found from southern Mexico to Panama.

The result may not only be less-satisfying brews, but more expensive ones.

The good news – tempered, as usual, by some bad – is that Brazil and Colombia are having bumper coffee crops this year and should be able to compensate for the shortfall. The down side is, their coffee is not as prized for its quality, overall, as that of the Central American uplands.

We’ll keep an eye on the coffee situation for you, issuing updates as appropriate…