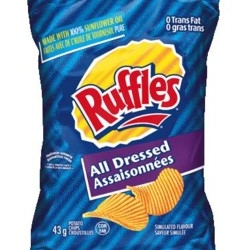 As a North American who enjoys all the world’s cuisines, I believe deeply that food is a basic human element, uniting the lives and cultures of everyone in this old world of ours at a fundamental level. But as a Canadian, I like to take note when my homeland gets a leg-up on Big Brother U.S.!

The Canadian finalist flavours for 2015: More exotic than their U.S. counterparts!

It’s not often that Canada can say it’s light years ahead of the U.S. – which may be the Fast Food and Fad Food ‘OZ’ of the world. But this time, we’ve got a lock on at least one snack food variation you probably thought could not be more ‘American’…

Yes, it’s an extreme take on the humble Potato Chip

But first: Bet you thought that all the flavour variations in the Potato Chip universe came out of the U.S. Wrong! Right now, here in Canada, we have a contest being fought out between four new and unique Chip Flavours, the cream of hundreds – maybe thousands – suggested by Chip fanciers across the country.

Lay’s Canada is test marketing the above flavours to see who reigns supreme among the wacky Chip contenders:

I gotta say it: The Canadian flavour finalists are a lot more imaginative and exotic than the U.S. ones!

The big thing about this promo stunt is that, if enough Lays fans (and probably many others, too) out there try all four finalist flavours (as Lay’s keeps suggesting, in its advertising and promo materials), that means Lay’s stands to sell tens of millions of bags of these non-mainstream chips, on top of all the regular-flavoured ones they would have sold anyway! What a windfall! Question is, are there enough potatoes out there in the food-supply chain to satisfy Lay’s ‘hunger’ in this time of (probably) huge demand?

But that’s not the main thrust of this post! 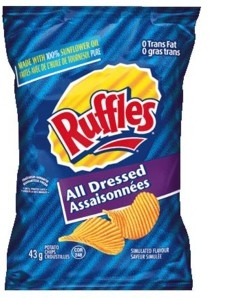 The big Chip World News this week is the announcement that All-Dressed Chips are coming to snack counters near most American chip lovers until December 7th., nationwide. Sounds like a test market exercise, to see where they sell and how well they sell. No shock, there.

But what I love most is, All-Dressed Chips have been a staple of Canadian snack counters for more than 15 years!

In fact, some U.S. writers have noted that American Chip Lovers have long-since developed a habit of ‘raiding’ Canadian corner stores and supermarkets for All Dressed Chips just before crossing back to their native side of the border. In fact, Ruffles All Dressed is the most popular flavour of Chips in Canada, according to Frito-Lay spokesperson Dana Lawrence. Somebody at Frito-Lay U.S. finally put the pieces together!

“Ruffles All Dressed potato chips have a flavor and a name that are hard to describe. All Dressed in the U.S. could mean you have all your clothes on, but in Canada it means a delicious ridged potato chip unlike anything you’ve ever tasted,” says a U.S. News Release from Frito Lay.

Without revealing its ‘All Dressed’ Flavour formula, Lawrence describes the taste as something unique: “”You don’t know quite what to expect when you put Ruffles All Dressed chips in your mouth. That’s part of the charm and discovery. This is not a light and crispy chip. Ruffles All Dressed potato chips are for people looking for more – more ridges, more flavor, more fun.”

We can tell you that we’ve isolated and confirmed (as far as our own and our colleagues’ tongues are concerned) the presence of Sour Cream, Onion, Ketchup (or BBQ Sauce; too many things going on to be sure which) Pickle and Garlic – at least in the Canadian version. Keep in mind that many packaged foods have different flavour and texture profiles not only between Canada and the U.S., but from region to region around the continent and overseas, to suit local tastes. You be the judge!