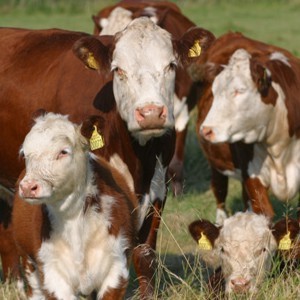 Beef prices to Soar due to Southern Drought

Okay. We were warned. U.S. Beef prices are starting to rise, as a result of winter action by ranchers and feed lot operators south of the border, just like market observers  forecast last fall. It’s all a result of drought in the U.S. west and mid-west last year that crippled livestock feed crops, causing beef farmers to cull their herds… 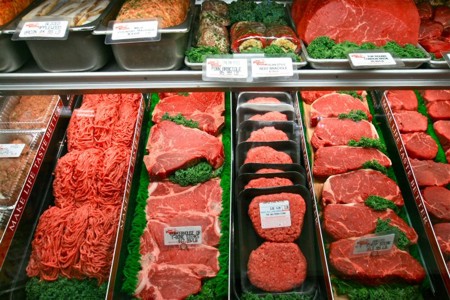 Soon to be history? The Prime Beef counter at almost every supermarket…

…And that has caused beef shortages which are coming to a head now.

But what does it mean for Canadian consumers?

Well… Canadian beef growers, especially in the west where massive herds are maintained and much of Canada’s beef is slaughtered and cut. They had bad weather, too, last year  – just like their U.S. counterparts, but not quite to the same degree. You must have seen the increases in beef prices at the supermarket lately. A nice steak or roast will cost anywhere from $15 to $30 per pound, depending on how nice it is and where you buy it.

But that’s not the worst of it.

Many restaurants and purveyors of ‘fine meats’ insist on using only western beef, saying it’s higher quality and better-tasting than beef grown closer to home. That’s one of their cachets, a major support column for their high-end marketing stance.

On  the other hand, how many of us average citizens can afford to eat at high-end restaurants or frequent boutique meat shops? Beef was already costly enough a year ago. The question is, where do we get the protein we need at a price we can afford?

Is there an alternative?

Yes. Several, in fact. And they are proven, traditional sources of essential nutrition, not new-age fads, or highly-processed ‘products’ or something totally foreign to our western palates, or going totally, scientifically Vegetarian.

Pork: The Noble Swine, in all its manifestations and incarnations, remains the least expensive meat you can buy, even though some Pork products have increased noticeably in price over the past six months or so. Don’t think, for a moment, it has to be Pork Chops over and over again. Try a Pork roast instead of a Beef roast on Sunday. Look for occasional specials on Pork Tenderloins at the supermarket. You can slice them into nice thick rounds, turn them on end and wrap with a strip of Smoky Bacon to make nice faux Filet Mignon.

Chicken: More expansive than it used to be, for sure. And the reasons are the same: Higher feed prices caused growers to raise fewer chickens over the winter. I’m sure you already know that your average chicken costs about $15 ($5 per pound or $11 per kg). Wait for occasional specials when small chickens are on at $1.99 or $2.99 per pound. They’ll be offered as a ‘loss leader’ (i.e.- at a super low price to get you into the store) for just a weekend or maybe even for one day only. Pounce on this deal. Get a bunch and freeze them. If you have a large family, roast two at once. Bonus: You’ll have four legs for the boys to fight over.

Tofu: I know. For many of you, this violates my promise that suggested alternatives would not offend western palates. But please keep reading… Tofu is quickly becoming main stream in the west and you can make it taste like anything you want – it’s a sponge for flavour. You can also get many varieties – from Yoghurt-smooth to very firm – meat-like in texture. Explore Tofu recipes and try putting a little more ‘Asian flavour’ in your diet. It’s good for you – low fat, high-protein and sugar- and salt-free – its and relatively inexpensive. And some self-proclaimed experts say that, if Global Warming and other ecological travesties persist, Tofu and Seaweed will be central players in all our diets in another 50 years.

I really do believe that Beef eventually has to disappear from our diets. Beef is already the most inefficient and expensive protein to produce (not counting fish, of course) and its going to get more expensive as time goes on. I’m preparing myself. You should think about doing the same…