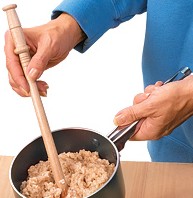 By: admin
In: Food Tips

I was leafing through the Lee Valley Tools Christmas flyer this morning when I came across this kitchen oddment:

No, it’s not a night stick for very short police officers or a miniature souvenir bat from the Slugger plant tour in Louisville, KY.

It’s a Spurtle, the traditional implement used by hundreds of generations of Scottish mothers to stir their Oatmeal porridge.

I had previously been under the impression that a Spurtle was a wooden spoon of some sort. But my own Scottish mother assures me that the item on offer by Lee Valley is the real deal.

Wikipedia says the device dates from at least the 15th century. Lee Valley suggests it’s roots run much deeper, speculating that the original version may have been nothing more than a tree branch with the bark removed.

Lee Valley is famous for resurrecting old, venerable tools, toys, games and kitchen gadgets, and having them made to its own high standards. I’m sure the Scottish Mother on your Holiday Gifting list would be thrilled to receive one of these beautiful reproductions.

But… I’ve been using the handle end of a big wooden spoon to stir oatmeal, pastry, bread dough, and similar substances for years. As much as I’d like a Lee Valley Spurtle… I’m not sure I really need one…  Ah, well… Christmas is coming!