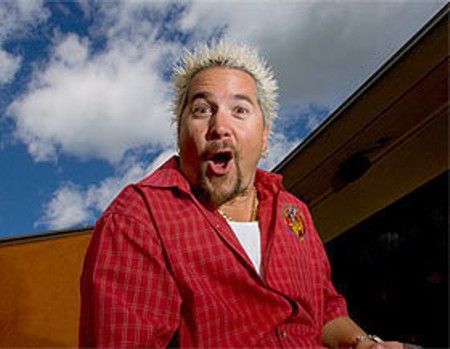 Maybe I’m giving Guy Fieri, self-proclaimed Cali(fornia) Kid, culinary wiz and diner diver, too much credit. But I think there may be more to the recent publicity fracas about his new NYC restaurant than meets the eye.

Too loopy to be true?

It all started when the Tripple-D Host’s new, three-storey, Times Square Guy’s American Kitchen & Bar drew a scathing review from noted New York Times food critic Peter Wells. Among other things, Wells said one of the signature house cocktails tasted like a blend of automotive fluids and, “how very far from awesome the Awesome Pretzel Chicken Tenders [were].”

“Is this how you roll in Flavortown?” Wells asked, summing up…

And thus the tsunami of chatter was loosed

Well, that was about a week ago and the reactions, positive and negative, are now in.

The “Oh, poor Guy!” people are about equally balanced with the “Serves the jerk right!” people. The consensus on the pro side is that Fieri and his restaurant should not be judged solely on one bad night.

Fieri is happy to go along with that, noting that the place has only been open a couple of months (!) and that there is room for improvement.

I agree with Fieri that the review was way over the top. Even if you’re an arch foodie and you despise Fieri for glorifying low-brow, high-fat, “family” dining, there’s no reason to lose all objectivity. Rigid objectivity and grammatical restraint always cut deeper than the old literary machete, in my book.

So why would Wells go off on a tirade like this?

And why did Fieri seem to have “all the right answers” when he was asked to comment on the review the next day?

“I’m proud of the food we put out, and always will be.” He told interviewer Savannah Guthrie on NBC’s Today Show. “We’re trying as hard as we can to make it right, to do it right. Is it perfect right now? No. Are we striving for that? Yeah.”

Sounded like something crafted and drafted for him by some high-priced spin doctor. A spin doctor who knew the review was coming.

Of course, it’s just idle speculation on my part – and who am I to second guess an international television personality and his organization?

But I had never heard of Guy Fieri’s new NYC mega-eatery until that wacko review went viral. What a great way to generate publicity for a huge, costly new venture that’s not getting the desired word-of-mouth promotion? Get a famous critic to pan it! And then let the comments, tweets and blog posts fall where they may. Pro or con, it’s all publicity and there’s no such thing as bad publicity. It’s all in how you manage it. Or so the high-priced spin doctors say.

Remember the Maple Leaf Foods tainted meat crisis a couple of years ago? Galen Weston and his people managed all that “bad” publicity expertly, by saying the right things at the right time, saving the Maple Leaf Brand from destruction and maintaining their traditional market share.

Now, harken back to the recent XL Foods tainted beef crisis. The powers-that-were at XL didn’t say anything publicly, creating an air of guilty(?) secrecy and suspicion among their customer base. What happened, even before the plant was revamped and reopened? Management of the company was handed over to an off-shore meat processor in the U.S. (owned by Brazillian interests!) and news stories indicated that a change of name was also imminent. A grand old Brand went down the drain and a major player in the Western beef industry was brought to its knees begging people to trust it again.

Fieri was sounding eerily like Galen Weston the morning after his eatery’s bad review was published.

Either the whole over-the-top review thing was an elaborate set-up by the Fieri machine… Or the slam was totally unexpected and Fieri handled it like a master politician.

I don’t care which it was. I’m just intrigued by the whole saga.