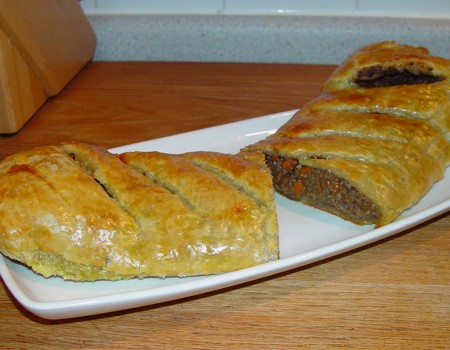 A new twist on Tourtière

I think most of us are just about recovered from the annual end-of-year holiday frenzy. I remember the last two weeks of December and the first week of January mainly as a festive blur. Feasts and family, glitz and gifts, Shortbread Cookies and snow blowers…

And do you know what I completely forgot? That traditional French Canadian Christmas favourite – Tourtière!

My take on classic Quebec Tourtière – using puff pastry and the “strudel”
approach to presentation.

This savoury short-crust meat pie has a unique flavour and usually appears, like magic, only at Holiday time. That’s given it an undeserved reputation as difficult and mysterious to make. In fact, my version is a quick, “one-pot” proposition that takes only about 20 minutes to put together and another 45 or so to bake.

If all this talk about laborious fine-dicing has you ready to head for the hills, let me hasten to point out that I always just wash the Celery; peel the Carrot, Onion and Garlic; hack them all into rough 1 in. pieces (except the Garlic, which can go in whole) and throw the chunks into the food processor. I set it on a low-medium speed and pulse until the veggies are chopped to a fine, even mulch. Not a purée, mind you. You still want to be able to see which veg is which and you don’t want to release too much of the veggies’ moisture.

Sautée the veg mixture in the hot oil for a few minutes, until the Onion and Garlic release their perfume. Then, add a pound (500 g or so) of ground meat. Veal, Pork, Lamb or even Beef will be fine. I prefer Pork. Brown the meat with the veggies and add: 2 teaspoons of Nutmeg, half a teaspoon of ground Cloves, and a good pinch each of Salt and Pepper. Blend well with the filling mixture. Then dissolve two tablespoons of flour in as much dry Red Wine as it takes to make a thin, batter-like slurry. Drizzle the slurry all over the mixture in the pan and quickly stir it in. The filling mixture will thicken almost immediately. If it seems too thick, don’t worry. All your sautéing and browning will only drive off part of the moisture in the veg and meat. Much of the rest will join with the starch, during baking, binding the filling into a firm but tender mass.

Roll on to victory

While filling is cooling down to around room temperature, lay out a sheet of store-bought* All-Butter Puff Pastry on a cookie sheet or restaurant sheet pan that has been lined with a piece of parchment paper. Be sure to leave the Puff on the piece of parchment with which it was backed for shipping. You’ll need this to finish the assembly.

Keep in mind that what is the bottom face of the sheet at this point will be the outside/top surface of the finished pie – the “presentation” side.

So… Down the centre of the pastry sheet, length-wise, starting and finishing 1 in. from each end, lay the filling in a “log” no more than 3 in. wide. Next. Pick up the edge closest to you, of the sheet of parchment backing the Puff. Gently roll the pastry up and over the centre of the log. Just as gently, peel the backing paper off the Puff until the parchment lies flat on the pan, again.

Whip up one whole egg in a small bowl and brush about a one half in. stripe of this egg “wash” on the ends of the Puff and the far lengthwise edge of the pastry sheet. The egg will glue the pastry seams against leakage.

Then roll the far edge of the pastry sheet up and over the filling like you did the near one, overlapping the first side by that eggy half in. Geently peel off the backing paper until it lies flat on the pan.

Fold the ends of the package up (which is to say down, or under, the finished pie).

Finally, roll the pie off the backing parchment sheet so that it rests in the middle of the baking pan with the seam side down on the pan liner parchment. Take a sharp knife and slit the fresh, beautiful, unblemished top “presentation” side of the pie diagonally at 1 in. intervals all along its length, to allow steam to escape during baking. Brush the rest of the egg wash over the top of the pie.

Bake at 350 F for at least 45 min., until the pastry has fully puffed and turned a rich golden brown.

Remove from the oven and allow to cool for 20 minutes or so before cutting and serving.

What more can I say?

* Big Bad Pro Chef Secret: Nobody in the foodservice industry makes their own Puff Pastry these days. Too time-consuming and too finicky. The people who do make Puff do that and only that. And have for generations. Ditto, Filo, even more so. ~ M.J.