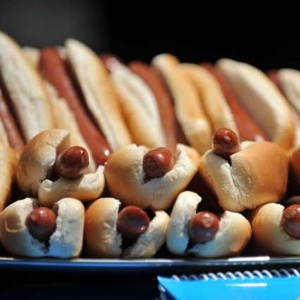 A front page poll this morning on Yahoo! Canada asks readers if they believe there is such as thing as a ‘healthy’ Hot Dog. Two-thirds of poll respondents so far say ‘NO’. But, as we’ve seen, in previous posts here on the FFB, ‘healthy’ is relative.

The lowly Hot Dog has gained, over almost a hundred years of popularity, a reputation as junk food. People have playfully suggested it isn’t even meat. True, there are fillers and stabilizers and preservatives – not to mention salt –  in many of the low-end Dogs in your supermarket cured meat cooler, but the basic product is still meat protein.

And that’s just one chapter of the overall Hot Dog saga.

The Hot Dog, as we know it, is said to have first appeared in New York City, when Polish immigrants Nathan and Ida Handwerker set up a nickel sausage stand at Coney Island, using Ida’s grandmother’s secret recipe. The recipe is still secret, but we do know it involves a good dose of Paprika.

Their Dog was all-beef, Kosher style, but not Kosher, per se. They also invented the universally acclaimed Coney Island Dog, with Mustard, Spicey Ketchup and Chopped Onions. Nathan  was a creative marketer and promoter. Even then, people wondered how wholesome his Dogs were. So, as the story goes, he hired men to wear white hospital coats with surgical masks hanging round their necks to stand at the cart and eat his wares!

Nathan’s Hot Dogs became so popular that they soon spawned a horde of copy-cats and the Hot Dog Legend was borne.

Today, Hot Dog eating has become a competitive sport and Food writers accord the ultimate dog a place of honour.

In years gone by, Hot Dogs attained a reputation for containing all sorts of yucky stuff: Tales involving slaughterhouse waste and floor sweepings and even sawdust have been circulated over the years – all apocrypohal, at least since government food inspection came into force.

Today, there is a decided swing in the meat processing industry, back toward the ‘All Beef’ idea and at least two Canadian makers have marketed ‘All Natural’ lines of not only Hot Dogs but other sausages and cold cuts, as well. These products emphasize simple recipes, without fillers or unnatural additives.

Give the Dog a chance. Read the ingredients list and the Nutrition Facts label. And decide for yourself. Some contemporary Hot Dogs definitely appear to be less unhealthy than others.  As has ever been so, it’s up to you to decide what you put into your body.

And, as Julia Child said: “Moderation in all things, including moderation.”