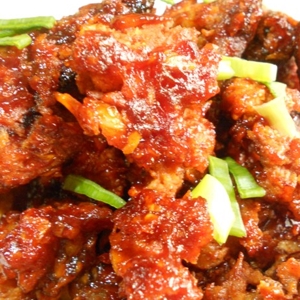 You’re gonna LOVE this… A Korean Fried Chicken magnate named his business after a globally-famous maker of high-fashion leather goods, hoping some of the elan would rub off on him and his food. Alas! The fashion icon took it to court and, now, the Chicken magnate is paying the price…

A Seoul, Korea Chicken restaurant not only chose a name that sounded like that of
high-fashion luggage maker Louis Vuitton, they also came up
with a very similar logo…

Mr. Kim (identified in news wire reports only by his surname) decided to call his restaurant ‘Louis Vuitton Dak’; ‘Dak’ being a play on the Korean  word for Chicken. He also came up with a logo that looked suspiciously like the one the fashion house has used for about a hundred years. The famed luggage, shoe and leather goods then sent the usual threatening lawyer’s letter ordering Kim to cease and desist. And change the name, of course.

Kim complied with the demand to change his restaurant’s name. The new moniker he came up with was: ‘chaLouisvui tongdak’, ‘tongdak’ being the Korean word fore ‘whole Chicken’. Great sense of humour, there.

But the change was not enough to satisfy the luggage giant and it went to court. The court agreed and fined Kim the equivalent of about (US)$12,500 for his transgressions. The second name certainly looks different, but it sounds almost the same when spoken.

The morals of the story…