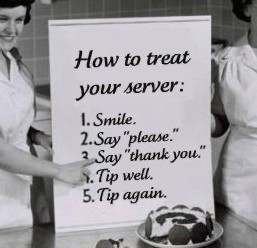 Who picks up the tips you leave?

A flurry of news stories lately has brought to light a reality of the restaurant business that might make you feel sad, angry or even cheated. Or all of the above. Did you know that many restaurants force their servers to share their tips with management? 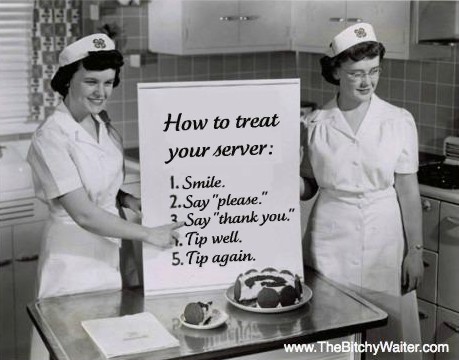 In a perfect world, we would all receive perfect restaurant service
and servers would be treated accordingly.

It’s called ‘tipping out’ in the business: Being forced to share one’s tips, earned as a server, with kitchen, support staff or management. It happens everywhere, and it’s technically legal. Because it’s not specifically illegal. Some restauranteurs have even codified their ‘skim’ at a sub-percentage of the server’s usual 15% to 20% gratuity from happy customers. Some servers have actually been fired for refusing to fork over the cash.

Servers call this extortion, at worst, and a ripoff, at best.

Now, however, Ontario New Democrat MPP Michael Prue is introducing a bill in the provincial legislature that would outlaw the practice of management forcing servers to surrender a portion of their tips to the house.

The Prue bill only covers forced tipping out. There is a long tradition of servers sharing tips with kitchen and support staff in recognition of the part they play in making the diner’s overall experience tip-worthy. Especially in high-end restaurants, where the standards of quality and service are expected to equal the size of the tab. And, correspondingly, the size of the tip. But that’s strictly up to the server.

And what about the tax situation? Restaurant servers, who identify themselves as such on their tax returns, know they’ll get an extra close look from the government if they don’t report their tips as income. Restauranteurs, on the other hand, have a business exposure and may be tempted to pocket their tipping out ‘skim’ under the table. We’re all being cheated, there.

Not to mention the tight squeeze many restauranteurs find themselves in these days. What with a 13% combined federal/provincial service tax (in Ontario) and rising menu prices due to rising food prices – particularly for already high-cost ingredients such as meat – combining to discourage the practice of dining out, they’re looking to put a buck in their pockets any way they can.

On one hand, diners are frustrated by the evolving culture of entitlement surrounding the low-paid world of restaurant work. Reports of servers becoming surly and downright hostile to diners who stiff them on their tip are surfacing more and more frequently.

On the other hand, servers are justifiably frustrated when large groups sit down together, for office or family celebrations, and leave only a nominal tip or one based on only a fraction of the total tab. Often, servers team up to ensure good service to parties of a dozen or more and, in the end, have to split a minuscule tip. It’s just wrong. 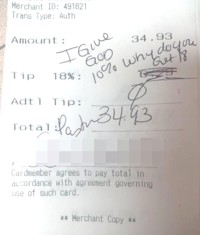 And, if all that isn’t bad enough, how about the increasingly popular practice, especially by high-end, high-overhead restaurants, of slapping a ‘standard’, mandatory tip of 18% to 20% on your tab? They do that to be more competitive in the face of rising costs. It amounts to keeping their menu prices down and compensating by slapping a ‘street tax’ on you for the dubious privilege of dining at their establishment. To add to the incongruity and unfairness of the situation, it’s important to note that this surcharge is totally disconnected from the tradition that tipping is supposed to be about: Rewarding good service.

And… Who’s to say the servers actually get any of the money, once the credit/debit card transaction finally clears through the restaurant’s business account?

But, above all, enjoy your meal!