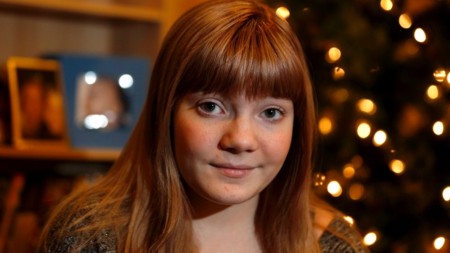 Just yesterday we told you how New Jersey 13-year-old McKenna Pope had started a petition on change.org to convince Hasbro, maker of the Easy-Bake Oven, to release a gender-neutral version of the iconic “girl” toy.

Pope complained that the current version of the Oven came only in girly colours – pink and purple – and that the packaging was similarly designed to appeal to girls. No pictures of boys anywhere to be seen.

I opined that the availability of an asexual Easy-Bake might open the door top more boys being interested in cooking. And that might, in turn, eventually lead to an easing of the chronic shortage of trained and qualified foodservice workers in Canada.

Yesterday, Pope met with Hasbro design and marketing execs and came out of the closed door session beaming with success.

CBS News reports that Hasbro gave Pope an advance sneak peek at a new product they’ve been working on secretly for the past year and a half – a gender-neutral black, silver and blue Easy Bake! There were even pictures of boys on the prototype packing, Pope told reporters.

Word is that the new Easy-Bake will hit store shelves sometime in the middle of next year. But it will be a decade at least before we know if more boys are choosing foodservice careers as a result of positive early experiences with cooking.

And in response to a comment on yesterday’s Pope/Hasbro post… I strongly believe that everyone should know the basics of cooking so they can at least look after their own needs in this fundamental aspect of their lives.