I coughed when I read the headline atop this story, as I came across it on one of my Food News Services. What kind of bozo would risk life and limb just to try something that probably originated between bored buddies trying to alleviate the mental stagnation caused by continuing COVID-19 lock downs… 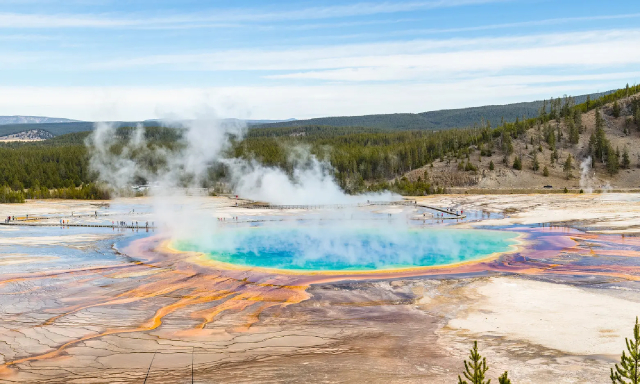 Would you risk falling into steaming water by straying off the designated walking trail?

Three men were recently arrested, charged and convicted of breaking a whole string of laws and regulations pertaining the safe and considerate use of America’s National Parks – particularly those with outstanding natural features such as geysers and hot springs. And that was probably a much lesser punishment than nature would have doled out if left to her own devices…

Consider, first of all, that hot springs can be as harmlessly warm as bathwater, or – like those at Mammoth Hot Springs in Shoshone Geyser Basin, which is part of Yellowstone Natural Park – hot enough to cook in. The springs in the Shoshone Basin average 180 F to 196 F. That’s also plenty hot enough to injure or kill a person or animal who strays into the area and cracks through the delicate mineral surface crusts created by evaporation all over the area.

“Water in hot springs can cause severe or fatal burns, and scalding water underlies most of the thin, breakable crust around hot springs,” said the park in a statement to TODAY Food.

To complicate things, visitors have to hike into the area sticking to carefully routed, safe trails. If you do get injured, your buddies have to carry you out. More likely, you’ll have to be air-evacuated, and the cost of the ride (though I couldn’t confirm this) is probably going to be charged back to you. But that’s all background.

The story, as we know it

I’d love to know why three guys from nearby Idaho Falls decided in the first place to hike back into the Shoshone Basin dragging two Chickens, a bunch of cooking pots and other paraphernalia in a burlap sack, with the intention of ‘cooking dinner’. The trio was turned in by other visitors who became suspicious after watching the group prepare for their stunt, and called the Park Rangers.

Now, let me not neglect to mention that the August 7 stunt was apparently a family outing, since the Ranger who responded reported talking to a group if 10 people, only three of whom – who were literally caught holding the bag – were ultimately charged with several counts of breaking Park Rules. The trio appeared in Mammoth Springs Court on September 10, pleading guilty to the charges. If they thought that approach was going to make things go easier for them, they were wrong. The ring leader was hit with (US)$600 fines for each charge, and received two years of unsupervised probation. His two pals received lesser fines, and all three were banned from the Park for 2 years.

And did I mention that one of the group associated with the incident was a small child?

Would you try this careless, potentially deadly stunt? Would you risk taking a child to such a dangerous place? Do you enjoy the taste of Sulfur in your food? Do you want to risk melting the soles off of your favourite hiking boots? Just to make your supper in a new, albeit intriguing, way? And all that for plain old boiled Chicken, at that?

These folks may have been lulled into a false sense of security. Living so close to the site – they may have lost at least some of their original fear of the dangers over repeated previous visits to the scene, and threw caution to the winds. But that’s in the same category of aberrant behaviour as walking on the railway tracks, riding in a boat without life preservers – or venturing out of your lock-down ‘pod’ without a mask.

I blame the whole debacle on a bunch of friends looking to banish boredom and get some fresh air after 6 months of isolation due to the pandemic. Let’s all remember why we’re isolating and masking, and so on, and resolve not haul off and do crazy things out of desperation to stretch our wings.

As my Mom and her Mom always said, ‘This, too, shall pass.” Muse on that…