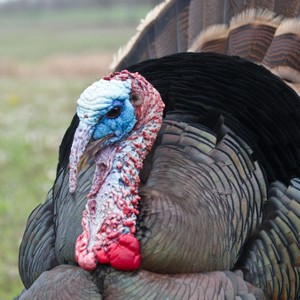 Secret to the ultimate Holiday Turkey?

You’ll probably have heard about people who’ve experimented with feeding fermented silage to livestock – even beer, itself, in the case of at least one ‘artisan’ Pork producer – claiming the alcohol makes the meat sweeter, juicier and more tender. Well, there’s now a guy trying it with Turkeys… 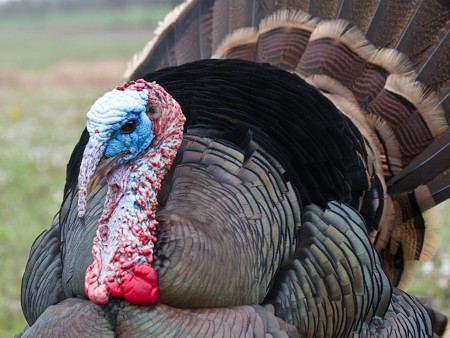 Here’s the kind of Turkey the Pilgrims dined on way back when:
an American Wild Tom Turkey. There’s no record of what he ate.
Or how the early settlers of New England prepared him…

Yup. This new entry in the category of Things People Tried Just Because concerns a guy in New Hampshire who says he’s been feeding beer regularly to his Turkeys since 1993, when one of his birds accidentally knocked over a can of beer and drank it – greedily and gratefully. Farmer Joe Morette also claims his beery birds are fatter than regular Turkeys. Well, that stands to reason.

Customers of his, who he says are in love with his ‘Brewskeys’, agree with him that the gravy they produce is also head and shoulders above the conventional.

First, I think his Turkeys must almost certainly be fatter than conventionally-raised birds. We’ve all seen what happens to humans who regularly consume a lot of beer. And the conventional thinking in the food industry is that ‘fat is flavour’. So that might mean his birds cook up more flavourful. After all, the big Turkey packers inject butter, oil and Margarine into birds so they’ll baste themselves while cooking. And that brings us to…

Second, the issue of juiciness. Sure. I’ll buy that. But nothing is going to save a bird that’s overcooked. That’s the mortal enemy of the Perfect Holiday Turkey. Roast your Turkey, with the cavity empty, until a meat thermometer inserted in the thickest part of the breast reads at least 175 F.

Third, I’m not skeptical of Morette’s claim that his Turkeys taste different than regular ones. The flavour passed on from beer to the meat would probably be that of Hops. And that’s an Herb and herbs just contribute to the overall umamni of festive recipes.

And that’s what I have to say. One thing the new article I read about Brewskeys’ didn’t cover was how much Morette charges for his super-charged birds. Bet it costs less to buy a conventional one and marinate it in your fave brew… Bet it would turn out pretty much the same.

The take-aways from this crazy post? It’s almost always cheaper and more wholesome to make it yourself. Not to mention more fun!

What I really want to know is – what was an open can of beer doing in Morette’s Turkey yard in the first place?