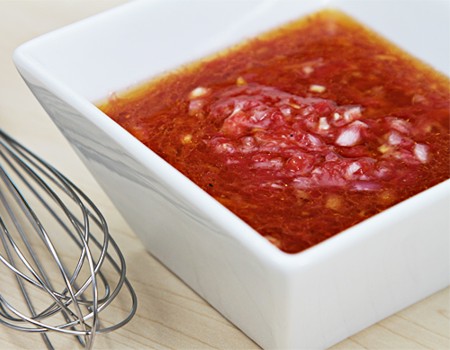 A word about “Dressings”: “Dressing” is really just a general term referring to cold sauces. As we’ve seen in our discussions of Mayonnaise and Caesar Dressing, the line between “Sauces” and “Dressings” is, at best, a blurry one.

As we mentioned briefly in Sauces Part IX, Vinaigrettes are a large family of dressings that all have four things in common: Oil, a sour (acidic) component (such as Vinegar, Dry Wine or Citrus Juice), a sweet component and an emulsifier.

The magic of emulsification

As we noted in the previous installment of our Sauces series, emulsification refers to the ability of an ingredient to mediate the mixture of Oil and Water in such a way that they don’t separate again if left to rest.

Among the most common emulsifiers we’ll come across in the Sauce universe are: Dry or Prepared Mustard, Egg Yolks, Heavy Cream and Puréed Garlic.

The Classic French Vinaigrette formula is and will always be: One part Sweet, one part Sour, Three parts Oil and a small amount of a suitable Emulsifier. Beat aggressively in a large bowl. Add Salt and Pepper to taste and any other Herbs or Spices you wish.

However… In recent years, with the rise of Fusion cuisines and an increasing awareness of the cuisines of exotic cultures, chefs have loosened up some on the classic formula.

There’s one school of thought that favours up to five parts Oil. And a couple of currenty-hot TV Chefs are advocating equal parts of Oil, Sour and Sweet. It’s up to you. I’ve always preferred the Classic 1-1-3 formula.

Just placer your Sweet Sour and Oil ingredients in a suitable mixing bowl or the bowl of a blender or food processor. Add your flavouring ingredients and whiz on medium until the dressing is totally blended. Taste for Salt and Pepper. If making your dressing manually,

This is the time and place to bring out your best Extra Virgin Olive Oil. The fruity, complex flavour of good Oil is a major player in the overall flavour of any Vinaigrette.

A world of Vinaigrettes

Most non-creamy sauces and dressings are essentially Vinaigrettes. You’re no doubt familiar with French and Italian dressings (which always seem to separate in the bottle). I’m also a fan of what I’m told is “German Style” oil-and-vinegar dressing on Cole Slaw. And there’s a hot German Potato Salad which traditionally takes a Vinaigrette dressing.

In fact, you can make a Vinaigrette to complement any Salad or Side Dish you may want to jazz up, whether it’s being served hot or cold!

Enjoy VInaigrettes with almost anything! Except, maybe, on Desserts. But that’s where Sour Cream and Yoghurt Sauces come in – as we’ll discover in Sauces Part XI !