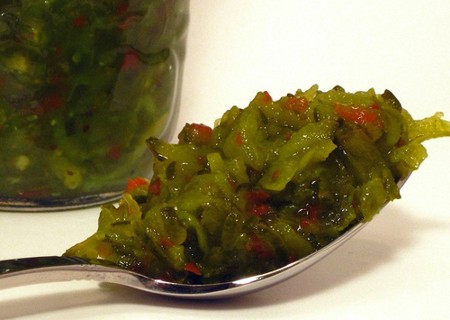 Relishes: By name and nature

The concept of condiments and savoury accompaniments employing pickled or preserved fruits and/or vegetables goes back to ancient times in Asia and at least to the Middle Ages in Europe. Back then, they used Relishes not only as a way of preserving foods in the absence of refrigeration, but also to disguise the flavour and odour of decomposing or stale food (sharing that duty with Black Pepper, Cloves and other strong Spices). Nowadays, we use Relishes to enhance and complement a host of our favourite dishes.

The English word “Relish” is believed to evolved from the French “relais”, meaning something left behind, as in an aroma or an aftertaste. It was obviously something pleasant that was left behind! By the early 17th century, “Relish” was in common use both as a noun (i.e.- the condiment) and as a verb meaning, broadly, “to take pleasure in”. 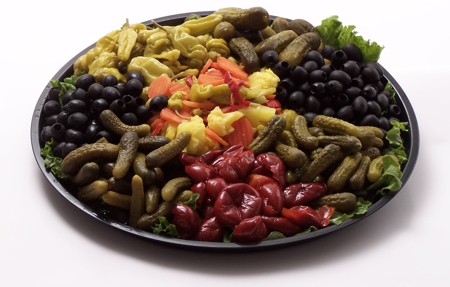 Condiments developed more or less independently in Asia, Europe, and the Americas all fall within the classic definition of “Relishes”.

In a practical sense, Relishes themselves fall into two functional categories: Pickles and Sauces.

Technically, anything preserved in salt and/or vinegar (with or without supporting Sugar, Spices or Herbs) is a Pickle. While the vast majority of Pickles are based on vegetables, there are some interesting and exotic exceptions.

Pickled Lemons, preserved in Salt brine, are commonly used in Indian and North African cuisine. Actually, it’s the rind that is prized by discerning cooks, oozing with concentrated Lemon flavour, but with none of the acidity of fresh Lemon Juice. The juice and pulp are usually discarded once the pickle has matured.

Pickled Eggs have long been featured in British and European pubs and delicatessens, along side Pickled Sausages and, sometimes, even Pickled (Smoked) Oysters.

Cucumbers have probably been pickled in Eastern Europe for a thousand years. Certainly, Cucumber pickles have been a staple in the Western World since Salt and Sour Wine (Vinegar) became plentiful following the Middle Ages. At that time, pickling was primarily employed as a preserving process, to allow seasonal produce to be stored and used year-round.

Today, the condiment shelf at the supermarket runneth over with variations on the classic Cucumber Pickle. There are big ones and small ones, Dills and Gherkins, lengthwise-sliced sandwich” pickles and cross-cut round Pickle “Chips”; cured with Dill, Garlic, sundry traditional Spice blends, a variety of sweeteners and Vinegars, and sometimes Mustard. You want it? They’ve probably got it.

Cucumber Pickles were spread across the world by European explorers who took barrels of the preserved vegetable with them on their voyages of discovery. The word “Pickle” is said to come from the Dutch “pekel” which translates literally as “brine”. The British Empire single-handedly made Cucumber Pickles a delicacy upon which the sun still never sets, and there are varieties of Cucumber Pickle reflecting a broad spectrum of origins. 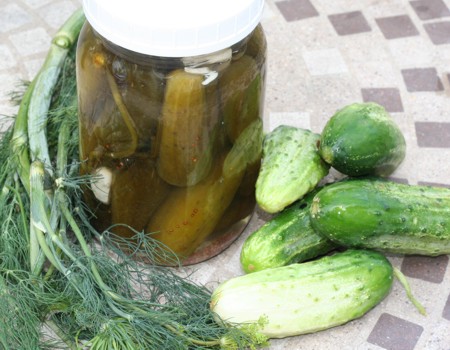 The Venerable Cucumber, King of Pickles – Fresh off the vine (right),
and celebrating it’s ultimate ennoblement as the Classic Deli Dill (in jar).

Polish Dills are traditionally aged for a few days to a few weeks in wooden barrels, in a Salt-only brine (no Vinegar) with lots of fresh Dill Weed and varying amounts of Garlic. This is about as basic as pickling gets. Heard of “Polski Ogorki”? “Ogórek” is simply the Polish world for Cucumber…

So-called “Kosher” Dills are mainly a U.S. phenomenon. They’re basically Polish Dills made from large pickling Cucumbers, with lots of garlic and Dill. Kosher Dills aged for a short period of time are commonly referred to as “half-sour and those fermented longer are called “full-sour”. And, by the way, “Kosher” Dills are not necessarily Kosher in the religious sense, but they are made in the traditional manner employed by New York City Jewish pickle makers.

In other parts of the world, notably the UK and North America, Vinegar is used as well as Salt in pickling brines, which often employ a traditional blend of Herbs and Spices generically referred to as “Pickling Spice”.

“Picking Spice” ingredient combinations can vary from one commercial mix to another, and every serious pickle maker has a favourite formula of their own. However… Bay Leaf, Peppercorns, Mustard Seed, Cloves and Allspice are pretty universal. Include Dill and/or Garlic as befits your taste. Some regional and family recipes also call for Ginger Root, Cinnamon Bark, Cardamon Pods, Coriander Seed, Hot peppers (Whole fresh or dried in the jar or dried flakes in the brine) and other additions. It’s entirely up to you!

Anyway… Add your signature Pickling Spice blend to the basic Salt-Vinegar-Sugar brine, bring to a boil and then pour the mixture over whole Cucumbers, with the stem ends intact. It’s also important to choose unblemished Cukes with no breaks in their skins. Otherwise, you’re liable to get mushy (rather than delightfully crunchy) Dills. You can preserve them in the traditional way (under vacuum seal in Mason Jars), or just bottle then refrigerate them.

And let’s not forget the Cabbage family! Pickled Cabbage is classic to cuisines from Germany, where Sauerkraut is legendary, to Korea, where hot, spicy Kimchi is generally considered to be the “national dish”.

Olives: In a class by themselves

Ah! The noble Olive… Fruit of the Olea europaea tree, native to coastal regions of the Mediterranean, central to the cuisines and cultures of Greece, Rome Spain, Portugal North Africa and the Middle East, the olive is harvested either green (fully grown but unripe) or dark (“black”; ripened) and “fermented”, or pickled, in a salt brine. The “fermentation” mellows the olives and attenuates their considerable natural bitterness.

Olives are now available worldwide in a plethora of regional varieties, from Greek Calamatas to Spanish Manzanillas, pitted and unpitted, plain and stuffed – with everything from Pimento bits to slivers of whole Garlic Clove.

Saucy Pickles can be divided into a number of families, based on whether they are sweet or savoury, and whether they are based on fruits or vegetables. Some classic concoctions, such as Chutneys, can actually qualify for membership across the board.

Classic Hamburger Relish – Chopped Cucumber Pickle with Pickle Juice,
Sugar, Spices and (as shown above) a garnish of
chopped Pimento and minced Garlic.

You’re undoubtedly familiar with the most popular types of Saucy Relishes in your own part of the world. But that’s just part of the story!

In Canada and the U.S., it’s standard Sweet Green Cucumber Pickle “Hamburger” Relish, Corn Relish or Tomato Chili Sauce; or Chow-Chow (based on Pickled Cabbage), Piccalilli (based on Pickled Sweet Peppers) or Mustard Pickle (featuring Cucumber and Onion in a Mustard Sauce).

In the UK, they love Branston Pickle (Diced Mixed Vegetables in a Spicy Tomato Sauce), and a wide variety of Chutneys, which can be based on just about anything, from Tomatoes and Sweet Peppers to Pears and Prunes.

Chutneys originated in India and Southeast Asia where they remain a central feature of those exotic cuisines. Asian Chutney makers go even further, though, making saucy relishes from Hot Peppers (eg.- Indonesian Sambal Olek), Peanuts (eg.- Thai Satay), Cilantro (pickling the plant’s pungent roots), Mangos, Onions and Tamarind. Sweet Chutneys set themselves apart from Jams and Jellies specifically in that they always have definite sour and savoury components, along with the syrupy sweet signature of our familiar breakfast spreads.

All of which is not to say that you can’t make fruit Chutneys out of almost anything, be it Apples, Strawberries, Rhubarb, or Plums. Not to mention Cranberries! Or… I have a great recipe for a Pineapple Jerk Chutney which goes great with Fish, Lamb, Goat, Pork or Chicken. I also have a Sour Cherry Chutney recipe which relies heavily on Cinnamon, Cloves, Brown Sugar and Apple Cider Vinegar. It’s great with Red Meats, especially grilled cuts, or as a topping for plain Vanilla Ice Cream, if you want to impress your Foodie Friends!

The scope of this admittedly lengthy overview of “Relishes” is, nevertheless, nowhere near wide enough to accord fair attention to all the myriad tribes of the Pickle Clan. But fear not! We’ll offer more-detailed recipes and technique overviews, focusing on specific Pickle traditions, in future installments of Cooking 101!