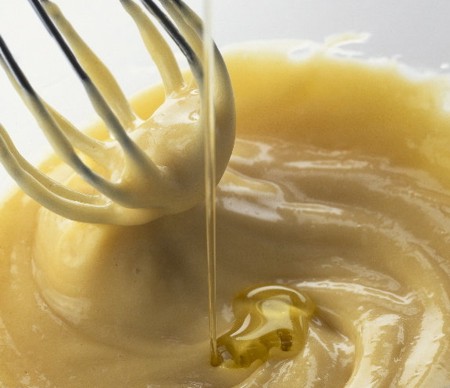 Mayonnaise, Hollandaise, Béarnaise and a select group of derivative sauces are unique in that they are based on whipping oil or butter with egg yolks.

Emulsification for the nation!

Emulsification refers to the ability of egg yolks to mediate the blending of oil and vinegar in such a way that the two don’t separate. Emulsification is a cornerstone of Vinaigrette salad dressings (see Sauces Part X) and other culinary delights that require oil and water – traditional enemies – to get intimate.

The simplest and most familiar of the “-aise” sauces is good old Mayonnaise. Let me point out, right off the top, that Mayo is not made exactly the same way as Hollandaise or Béarnaise. The latter fancy sauces are cooked in a double boiler. Mayo, you simply whip up in a clean bowl, bar blender or food processor. Mayo is made cold and usually served cold.

Traditional French Mayo starts with one Egg Yolk per serving. Save the whites for baking or making your cholesterol-conscious loved ones a responsible omelet. A little of the white in with your yolks won’t ruin your mayo, the way a speck of Yolk will ruin your Meringue…

If making up a small amount of Mayo, place the yolks in the bottom of a fair-sized bowl and beat hard for a couple of minutes with a wire whisk. Add a half teaspoon of White Vinegar, a pinch of Dry Mustard and a pinch of Salt. A pinch of Cayenne is optional. Now beat some more, until the mixture is thoroughly combined. Next comes the tricky part. But have no fear!

Continue beating the yolk mixture steadily but not hectically while adding about 1.5 cup of vegetable oil per egg yolk to the mixture in a thin, gradual stream. Add another teaspoon of Vinegar per yolk to the mix in multiple additions, alternating with the Oil. The Mayo should lighten in colour as it gradually thickens. The longer you beat it, the thicker it will get. The finished consistency is up to you. You can add a little lemon juice to perk up the flavour top notes or thin out the finished product.

If your Mayo breaks…

If your mayo breaks (because you added too much oil, or added the oil too quickly) you can save it by beating another yolk or two in a fresh bowl, adding some prepared mustard (which already has vinegar in it) and adding the broken Mayo slowly while beating aggressively. If you have a blender handy, you can put the broken Mayo in  that and spin on medium (if you have a choice of speeds) until the emulsion reforms.

Using a Blender or Food Processor

You can simplify and speed up the job of making a larger batch of Mayo by using a bar blender or food processor.

Blend the egg yolk mixture initially on medium to thoroughly combine all the dry ingredients and vinegar. Then put the mixer on high speed while adding the Oil in a thin stream through the hole in the top of the appliance’s bowl cover.

Basic Mayo is just the beginning.From this relatively neutral creamy base are built such Salad staples as…

Russian Dressing… is made by adding Chili Sauce or Tomato Ketchup, a small dollop of Horseradish and some minced onion.

Ranch Dressing… is simply equal parts of Mayo and Sour Cream thinned out a little with Butter Milk, some White Wine Vinegar, a dash of Worcestershire, a pinch of Mustard, and some minced garlic and scallions. Figure out the proportions for yourself and create your own truly unique House Ranch!

Bleu Cheese Dressing… is made by adding a dash of White Wine Vinegar, a dash of Hot Sauce (optional), a dash of Worcestershire and as much finely crumbled Bleu Cheese as you like. You can vary this classic by substituting half the Mayo for Sour Cream or Yoghurt.

Aïoli… the latest old-is-new-again Mayo family foodie fave, is simply Mayo made with Olive Oil rather than plain Vegetable Oil plus a shot of minced Garlic. I like Roasted Garlic in this spread. You can add other things to complement the dish you are using it with. You imagination is the limit!

Perhaps the most famous of the Mayo based dressings is classic the Caesar Salad recipe. Place beaten Egg Yolks, a squeeze of Lemon Juice, puréed Garlic and Anchovies (to taste) in a blender or Food Processor. With the food processor running on high speed, start adding an amount of Olive Oil suitable to the number of Yolks you are using, in a thin stream. Once all the Oil is in and the dressing is thick and creamy, taste for Salt, Pepper and Lemon Juice and stir in enough grated Parmesan (or Peccorino) to make a suitable impression on the eye and the palate…

Why make your own Mayo?

There are lots of good quality commercial Mayos on the market. I like the one that calls itself “Real Mayonnaise” and is made with the traditional ingredients, rather than egg substitutes, additives, stabilizers and other gunk. The “Lite”-or-regular decision is ultimately up to you. Both work well in most dressings. But I prefer the flavour and texture of “real” Mayo.

I prefer to make my own mayo when I’m whipping up a special dressing for a dinner party or other small gathering. That way, I always get just the way I want it, and I can tell my awestruck guests, “Yeah – I made it myself!”

Make only as much Mayo as you need for the meal at hand. I’ve framed my “recipe”, above, with the notion of one Yolk per person in mind. You can hold Mayo or Mayo based dressings for up to an hour on a cold buffet bar. I never leave it out of the fridge for more than 45 minutes in any case. You can’t be too careful when you’re working with raw Eggs!

Next time, in Sauces Part IX, we’ll move on to the cooked Egg emulsion sauces, Hollandaise and Béarnaise.