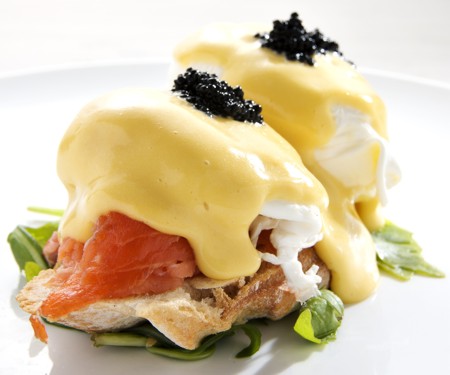 Like their cousin, Mayonnaise, Hollandaise and Béarnaise are more about mastering a technique than following a recipe. Like Mayo, they are made by whipping egg yolks with fat. Unlike Mayo, they are prepared hot and may be served hot or cold.

Eggs Benedict – the way most of us were introduced to Hollandaise Sauce.
This version is dressed up to the nines with Smoked Salmon and Caviar!

Hollandaise and Béarnaise differ chiefly from Mayo in that they use Clarified Butter rather than Vegetable Oil.

You can make Clarified Butter yourself simply by heating butter on Low in a small saucepan and waiting for the Milk solids to separate from the Butter Oil, or Butter Fat.

I have one of these gadgets (below) which I’ve found absolutely brilliant for making Clarified Butter and Consommé, as well as separating Pan Jus from excess fat from the roast: 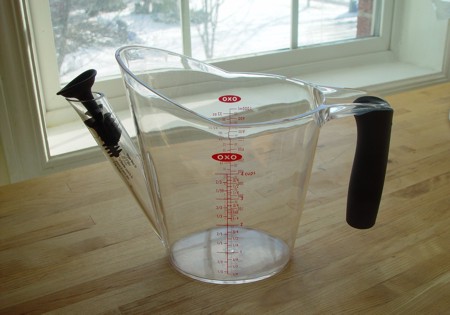 Yup! It’s really just a measuring Cup with the spout connected down near the bottom. That way, you can pour off clear liquid without disturbing the fat which has separated out and floated to the top. “Gravy Separators” are available at most kitchen stores.

The Separator shown above also works as a measuring cup and has the added advantage of a full 1 L (4 cup) capacity. You can clarify two pounds of butter at a time with this baby!

This rig is just a saucepan with an inch or two of plain water in the bottom topped off with a glass or steel bowl slightly larger than the pan so it won’t fall in. Get the water boiling gently and place the bowl on top. Now you’re ready to make Hollandaise.

Then remove the bowl from the heat and start adding 3/4 cup of room temperature Clarified Butter to the Yolks gradually, in a thin stream, like we did when adding the oil to the Mayo, beating all the while. If you’ve been thinking that this is a three-handed job, you’re right. So, if you don’t have a helper on hand, try forming a kitchen dish towel into a doughnut and steadying the bowl on that while you whisk with one hand and pour with the other.

Add a little more Lemon Juice if the sauce gets too thick. Season with Salt and Pepper to taste and add a pinch of Cayenne for zip.

Maltaise Sauce… is made by adding a shot or two of Orange Juice and some grated Orange Rind to basic Hollandaise. Use Blood Oranges if you can get them. This sauce is great on dark green vegetables, such as Spinach, Asparagus and steamed Broccoli.

Mousseline Sauce… is made by adding one part stiffly whipped Heavy Cream to 4 parts Basic Hollandaise. Decadence, thy name is Mousseline!

The beautification of Béarnaise

Béarnaise Sauce is made in much the same manner as Hollandaise, but it is blessed with some classic adornments that set it apart. Imagine Hollandaise with minced Shallots, White Wine, Tarragon and crushed Black Peppercorns. Garnish with some chopped Parsley and more Chopped Tarragon. Add another squeeze of Lemon Juice if the spirit moves you!

Make only as much Hollandaise as you need for the meal at hand. And make it as close to serving time as possible. You can safely hold it warm for up to 45 minutes. But remember once again, you’re working with Egg Yolks, here!

In Sauces Part X we’ll change course and explore the world of Vinaigrettes.