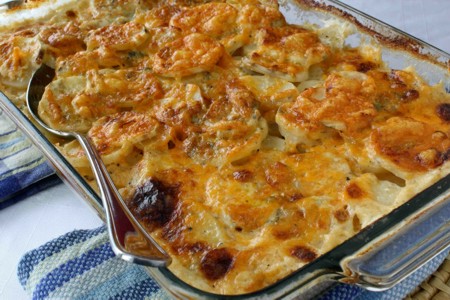 By: admin
In: Comfort Food

A classic accompaniment to roasted Ham, Scalloped Potatoes / Potatoes Au Gratin (hereinafter referred to as SP/PAG) is a classic comfort food most of us remember from our childhood Sunday dinners. It’s also what I ask for when my Mom asks me what to make for festive feasts when I come “home”.

With thanks to Dara, at www.cookincanuck.com, whose festive Three-Cheese SP
(pictured above) comes out of the oven looking remarkably like Erin’s recipe
(described below), but varies considerably in ingredients and technique.
Both recipes, however, are very quick and easy to prepare!

At risk of destroying any Cherished Childhood Memories, I want to share a recipe my sister and co-Chef, Erin, dug up recently – a recipe which makes putting together a batch of SP/PAG easier and faster than ever, while sacrificing none of the old-fashioned flavour and gooey goodness.

The classic way to make SP/PAG starts with making up about 6 cups of White Sauce (Classic Béchamel). To that you add a heap of grated cheese (Cheddar is common and Gruyere is grand!), and pour it all over a large casserole dish full of thinly sliced Potatoes. Top with some more Cheese and bake for 1-2 hours at 350 F, until the Potatoes are tender and the Cheese on top is golden and crispy.

That’s all well and good. But Erin’s SP/PAG epiphany pushes the envelope and results in a dish the likes of which you’ve probably never even imagined.

As Faithful Readers of Maggie J’s Fab Food Blog will be well aware, a classic Béchamel Sauce is seasoned with Salt and White Pepper to taste, with hints of Cloves and Onion, and a finishing pinch of Nutmeg. Erin takes that a little farther, running a large Onion (or two) through the same slicer or mandoline she she has set up to slice the Potatoes. 1/16 in. slices are ideal for this dish. Slice two or three large (or four medium) Russet Potatoes (large “bakers”), or 6 to 8 medium All Purpose White Potatoes, into 1/16 in. slices. Hold them immersed in a large bowl of cold water until you need them, so they don’t turn brown. Erin also slices up a handful of fresh Mushrooms to about 1/8 in. thickness. (Their thickness is not critical; she does ’em by hand).

You’ll also need about 4 cups (or more, to taste) of grated Cheese.

Trick Number One is to dry the Potatoes on some paper towels, or at least turn them out into a colander and shake off all the excess moisture, before starting to build your casserole. This will ensure that the cheese sauce which binds the dish together does not get too soupy during cooking.

Trick Number Two is to just mix up a quick slurry of Flour and Water – add about half a cup of cold Water to a cup and a half of Flour and beat with a fork or a whisk until you have a very thick, smooth, pourable Pancake batter-like mixture.Thin with additional waster if necessary. You heard right. No sauce to make – no stirring, and stirring, and stirring in front of a hot stove for half an hour. It couldn’t be easier or faster! And, if you thoroughly blend the Flour and cold Water up front, its lump-proof…

Putting it all together

In a well-greased 10 in. x 13 in. Lasagna dish, start with a layer of potatoes in the bottom, overlapping well and leaving no gaps. Sprinkle a good handful of the slivered Onions over the Spuds, shower a good handful of grated Cheese on top of that, spread the Mushroom slices evenly on top of the Cheese, and then pour about half the Flour Slurry over it all. Now, start the whole process over again with more Potatoes, followed by more Onions, followed by more Cheese, followed by the remainder of the Flour slurry. Top off with a cup (or more, to taste) of grated Cheese.

Bake in a 350 F oven for 1-2 hours, until the Cheese topping is golden brown and crispy, and the Potatoes no longer resist the intrusion of the pointed implement of your choice in a “poke” test.

Remove from the oven at least 20 minutes before serving to let the dish cool off enough to eat, and set up enough to portion-out elegantly.

As I recommended, in my Comfort Food Classics post on Mac & Cheese, don’t be afraid to go big with your Scalloped Potatoes. I usually do a big batch, as described above, and freeze at least half of it. It will keep in the fridge for a week and in the freezer for a good 6 weeks, well wrapped. Unless I’m expecting a big mob for Christmas or Thanksgiving Dinner, I usually make two separate casseroles and throw one right into the freezer. Or, you can refrigerate for 24 hours and cut nice, neat individual portions for convenient serving-sized freezing.

As with Mac & Cheese, try different inclusions and flavourings in your Scalloped Potatoes, to coordinate with your meal’s centrepiece entrée.

Have fun and eat well!