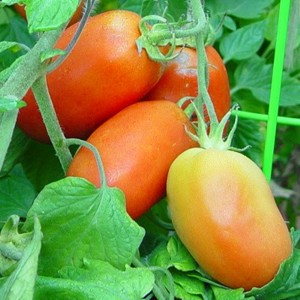 Yes, it’s that time of year, again. The tomatoes are starting to come in, fast, from the two or three little plants you put in over by the back fence last spring. Surprise! They’ve grown to three or four feet in height and each has about 20 kg of fruit on it, coming ripe all at once! 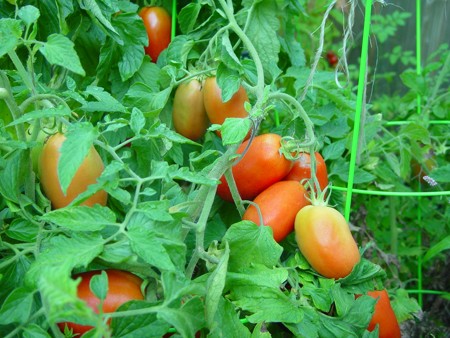 Mutiny of the Bounty: Two hundred jumbo Roma Tomatoes all coming ripe at once!

So… After you give everybody in your family and your immediate neighbourhood a basketful, what do you do with the rest?

Here’s what I do…

Get a big pot of plain water boiling on the stove top. I recommend a braising pan or dutch oven that is wider than it is tall. Fill it up about three inches deep and bring to the boil with lid on. Then turn down to a spirited simmer which is sustainable with the lid off.

While the pot is boiling, wash off all the fruit and inspect for rotten spots, insect holes, etc. Set aside any Tomatoes which have such imperfections for immediate use (after cutting away the bad parts, of course).

The fruit should be at room temperature.

With a sharp paring knife, cut a cross on the bottom of each ‘good’ Tomato, just piercing the skin. Make the cross about 1 in. / 2.5 cm on each arm. place four or five Tomatoes (with crosses cut) into the simmering water. Let them blanch for three or four minutes. Remove with a slotted spoon and place on a clean towel. The skin should peel back from the centre of the cross very easily leaving the Tomato flesh intact. If it’s sticking, put the Tomato back in the pot for another minute or so. Place the skinned tomatoes in a clean bowl.

Once all the tomatoes are skinned, you’ll have to decide whether you want to freeze them whole or cut them in half and remove the seeds, first. I just freeze them whole. That gives me the option to use them in different ways later on.

Place half a dozen or so prepared Tomatoes in each zipper-type freezer bag, squeezing our as much of the air as possible before sealing. Lay the bags flat until they are completely frozen. They’ll be much easier to stow in the freezer for the long run and won’t stick together like randomly-frozen bags often do.

Anytime you need fresh Tomatoes for sauces, soups or whatever, you can just grab a bag from the freezer. they’ll thaw out as fresh and flavourful as the day they went in!

It will take a few hours one weekend afternoon to freeze your fall bounty, but it will be well worth it when you want to make scratch Marinara in January…