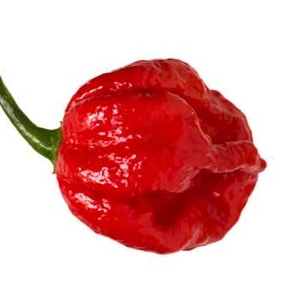 Hot Peppers Have A Unique Role

Everybody seems to love Hot Peppers. They show up as key players in many cuisines and folks from cultures to which Hot Peppers are not native quickly take to them when they become available. Why are we so attracted to the exotic heat of the fruits of the Capsicum Family? 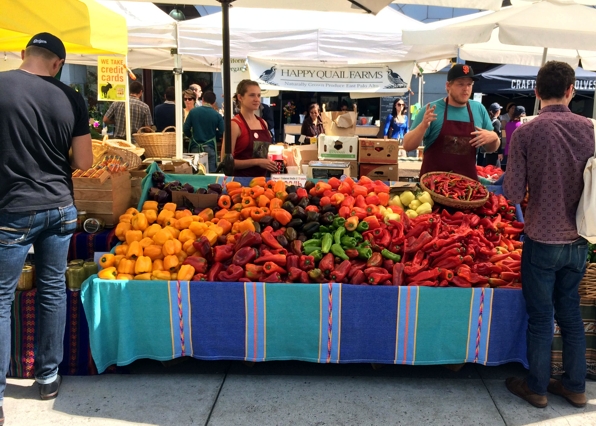 Sweet and Hot Peppers at a farmer’s market stand. Once scarce in Northern North America
and Northwestern Europe, Hot Peppers are invading our produce markets
in answer to soaring demand.

If you look clinically at Hot Peppers, you’ll soon realize they share one thing: Capsaicin. That’s the hot stuff. And they vary in strength from nearly-zero heat to readings of over 2 million on the official Scoville Heat Units scale. Something for everyone? Sure; from the common Sweet Bell Pepper to the scorching Carolina Reaper at about 2.2 mega-Scovilles. The hottest of the hot are, of course, man-made. That is, they’ve been cross-bread purposely to increase the heat level. Some of them are not even in tended for eating. They’re intended as raw material for the Pepper Spray industry, where hotter means more effective.

The hottest peppers customarily consumed by humans are Habaneros, famous for their contribution to Caribbean cooking, at an average of about 300,000 Scovilles. The Naga Bhut Jolokia, or GhostPepper, is the next hottest at around 1 mega-Scoville. People eat those, but generally only in crazy publicity stunts designed to get attention for the eateries that sponsor them. And such stunts have been known to send people to hospital or, even, to their graves.

We like the sensation that Hot Peppers make on our palates. And they have a spicy flavour not found in other fruits, vegetables or roots. They can be especially yummy roasted. And traditional dishes from around the globe are just not the same without them!

Part of the special allure of Hot Peppers is the ‘burn’. That’s where the Capsaicin comes in. Capsaicin is, chemically speaking, an irritant poison. Too much can hurt you, and not just your mouth. Your stomach lining is prey to such irritants. And the medical community now says eating too much hot stuff can damage brain neurons that are supposed to tell you when you’re eating something potentially harmful. That’s why people who ea a lot of Hot Pepper-infused foods ‘get used to it’ and can stand much hotter foods than the average uninitiated whimp.

They can be addictive!

Ever wonder why we go back for more Hot Peppers? The initial irritation triggers the release, by the brain of endorphins, which help block pain. You can get addicted. It’s kind of like the runner’s addiction to endorphins, released when they push their bodies beyond it’s usual limits. So reliable is the endorphin-releasing effect that Capsaicin is used in many common pain relief creams and patches.

Aside from the heat issue, though, Hot Peppers offer an array of good things, not the least of which is that they are a rich source of anti-oxidants and anti-bacterial compounds. That makes them natural preservatives and may help explain why Hot Peppers are so universal in the cuisines of regions where they naturally occur.

Is personality a factor?

Science says yes! People who are naturally adventurous are more likely to like spicy foods. Men and women have been shown in clinical trials to have different reasons for liking spicy foods. And there’s that addictive profile we mentioned earlier… And, of course, there’s always the nut-0case who wants to be famous for something and the best he can do is a Ghost Pepper eating contest. Did I mention that Ho9t Pepper eating challenges are almost exclusively attempted by males? Silly males!