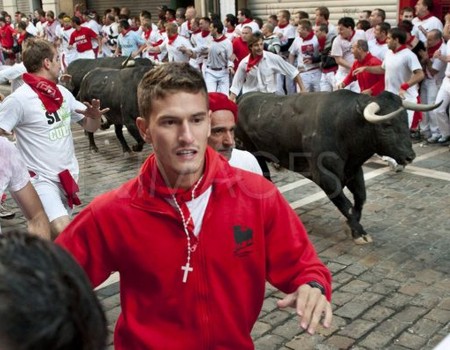 The current leading theory purporting to explain why people like spicy foods would have us believe that we love to hurt ourselves. Really. 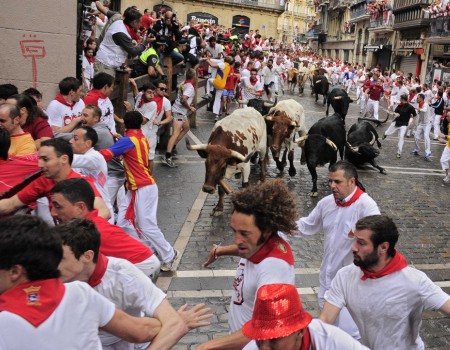 Are you a risk-taker? Do you seek new sensations? Try running with the bulls
at the Annual Festival of San Fermin, in Pamplona, Spain.
And have some more hot sauce.

Actually, the notion is that, when we eat hot peppers, we trick our body into going into defensive mode, releasing natural painkilling endorphins and pleasure inducing dopamine into our brains. It’s similar, we’re told, to the effect of pushing one’s self past one’s natural limits when exercising. The pain triggers the release of endorphins and dopamine.

Furthermore, endorphins and dopamine are believed to be addictive. That might explain why marathon runners and other competitive types report getting a “high” from their extreme activities and having “withdrawal” symptoms when they are prevented from exercising regularly, either by circumstances or injury.

Well… A new theory, out of Penn State University, suggests that folks with certain personality traits are decidedly more prone to try spicy foods and, subsequently, consume them habitually.

Apparently, people who are known as, or consider themselves to be, risk takers or sensation seekers, and those who love to try new things, are also hot prospects to love spicy foods.

The new theory is based on a study correlating certain personality traits with sensitivity to Capsaicin, the “hot” ingredient in hot peppers. However, the Penn State researchers say they found only correlations to positive traits, and no correlation to negative traits associated with the release of endorphins or dopamine by the body. So much for the “addiction” theory?

As an adventurous eater, a moderate risk taker, and a lover of spicy foods, I naturally favour the “personality” theory. Better a bit of a wild child with my free will intact than a hopeless addict, chained to a heavy Capsaicin habit!

So… Do you like to drive fast? Bungee jump? Visit new and exotic places? Do you get a thrill out the Casino experience, win or lose? Okay, then… Try the Chili!