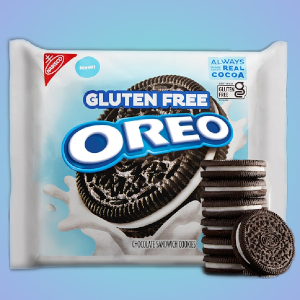 We recently posted about the apparent frustration and desperation among major food purveyors who seem to have gone imagination-bankrupt and innovation-dead. Now I have proof that even the biggest brands are drifting from the sublime to the ridiculous in their new product ideas… 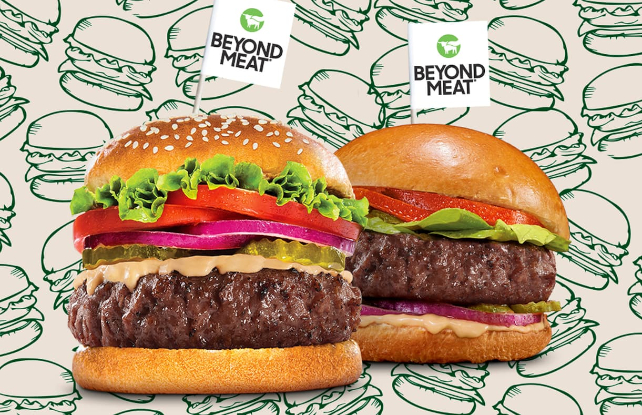 Beyond Beef Extra Juicy patties (Left) and Lean patties. I would be much more
more interested in a Beyond Plant-based Meat substitute line that
costs the same or – ideally – less than Real Meat.

One of the questions I often ask myself when evaluating new product announcements which regularly come down my Food News wire services is, “Does the world really need this?” Or, even, “Does the world really need another one of these?” The answer is often, “No.” Or, “Who really Cares?” Unless a copy-cat new product has something original or interesting about it, is tagged as identifying the rise of a new fad or trend, or simply makes news as a sign that a marketing war may be brewing in a certain niche, a negative answer usually gets the product tossed out of consideration for an appearance in Fast Food Week or, even more rarely, a post of its own.

With that in mind, I’ve got three little blurbs, here, that all demonstrate extreme inspiration bankruptcy. Maybe it’s the pandemic’s effect on the locked-down brains of marketing and product development people, or the continuing separation of creative types from their audiences… But I can’t believe major players in the Fast Food segment or the first-tier processed Food sector actually resorted to these ‘ideas’ to raise or maintain their brand’s profile above the noise of the ever-thickening, ever-more frantic crowd.

After all the trouble of developing a mainstream flavour and texture profile that emulates the hard-to-describe nuances of real Meat – particularly, the juicy mouth feel of rendered Beef Fat, Beyond has released new ‘Lean’ and ‘Extra Juicy’ varieties for the very particular Burger fan. There’s still no animal=based stuff in their patties but I imagine that the company is trying to cater to the tastes of a significant portion of their market which has asked for such options. The ‘juiciest patty’ contains 35 percent less saturated fat than regular 80/20 (Canadian ‘Medium’) ground beef, while the ‘Lean’ (Canadian ‘Lean’) patty contains 55 percent less Saturated Fat than 80/20 Ground Beef.

I want to know if these new formats cost about the same or notably more than the original Beyond Beef product. I would be much more interested in a Beyond Plant-based Meat substitute line that costs the same or – ideally – less than real meat. You want more Juicy flavour? Butter the bun!

Why, in the name of all that even purports to make sense, is Mountain Dew collaborating with NBA star Joel Embiid to float a new, limited-edition Dew-coloured, Habañero-based Hot Sauce? The concoction is described as Citrus-infused ‘flavour mash-up’. Fine. But Habañero Peppers are rated officially as 35-to-45 times hotter than the ubiquitous Jalapeño, which is pretty hot. How would anyone who didn’t already know ever know that there was anything else – much less a sweet Soda – in the bottle? This is nothing more than a straight novelty product which will ultimately interest Mountain Dew fans who also like Hot stuff (or vice versa), and will do little to dramatically attract additional major mass market consumer interest.

Why, again, is this product so special? It speaks to a relatively small market segment and simply scuffles up ground that’s been ploughed over already by several other brands. I see Trader Joe’s as a brand that caters to the novelty Foods niche the same way Whole Foods caters to the ‘Prestige’ Foods niche. Joe’s rarely brings out a product that hasn’t already been launched an hyped by other brands. And, again , I wonder,”Why add expensive Truffles to a Hot Sauce that will undoubtedly be drowned out by the burning hot flavour of the Peppers?” Just to get on the bandwagon and generate ad views for ‘Trader Joe’s’, if it can, from all the hype the competition has already drummed up.

Staying with the Truffles, for a moment…

Truff Brand, a ‘leading’ brand of Truffle-flavoured stuff (hence the name), also has a new Hot Sauce which is apparently the competitive target of Trader Joe’s copy-cat concoction (above). Truff has also just launched a line of Truffle-infused Pasta Sauces. The Truff Sauces are touted as both Pasta Sauces and Pizza Sauces, and come in Arrabiatta and Pomodoro ‘flavours’. I’d buy into that (at the right price) except that their formulae also include stout doses of hot Red (Italian-style) Chili Peppers. And, again, I say, “What’s the point of making a nice Pomodoro (for instance) and smothering it in hot stuff?”

OREOs, which must have set a record for releasing new Cream Sandwich Cookie variations by this writing, is branching out to ‘healthier alternatives’. Behold, the Gluten-Free OREO line, which is due to show up on store shelves this coming January. No mention of the price in the official Nabisco news release, but I suspect the Gluten-free OREOs will – like other Gluten-free products – cost significantly more than the ‘original’ ones. My take?

Do we really need an indulgence that’s tailored to a very small slice of the market which until recently has been considered more of a nuisance than a necessity to serve? Well, it’s become fashionable to have Gluten-free variations of one’s products, just to prove that your brand is responsible and sensitive to the marketplace. Besides, this move probably betrays the fact that even the prolific OREOs test Kitchen has run dry of new flavour ideas to keep its brand image clean and elevated. May I humbly submit, for your consideration, Hot Pepper and Truffles? They’re trending now, on the novelty food circuit!

2020-11-17
Previous Post: Mucking Around In The Pantry: Variations On Peanut Sauce!
Next Post: Ketchup War Flares After Heinz Tweets ‘Homecoming’