Remember all those stories about possible food shortages and price increases back near the start of the COVID-19 pandemic? Much of the speculation was just that – guesses by frightened souls who had no hard evidence that anything was really going on, even though the Meat plant shutdowns looked menacing… 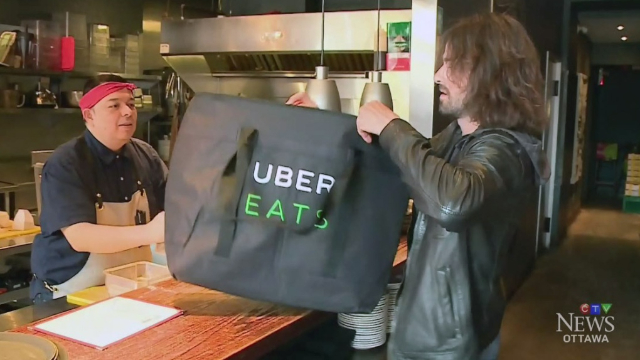 UBER Eats, the current leader in the food delivery sector, along with Door Dash
and other big players, were quick last week to respond with delivery
fee cuts after, being called out by Ontario Premier Doug Ford
for gouging consumers and merchants on their rates…

Turns out that Canada is a net Meat exporter. So we, ourselves, had no shortages or price increases due to the coming of COVID-19. Now, though, economic and food sector observers say the fact that the pandemic is dragging on so long is making the prospect of shortages and food price increases more possible – maybe unavoidable – before the end of this year and on into next year.

Costs and prices are tightening up more with every passing week, these days, says a Dalhousie University researcher who calls himself Canada’s Food Professor: “That is what is happening now. COVID-19 is accelerating this pace,” says Sylvain Charlebois. “We’ve been spoiled as consumers.”

When contacted by Global News for a preview of his coming 2021 food price forecast (due out in December), Charlebois said we’re probably looking at an overall 4 percent increase over 2021 – the same as he called for this year.

One reason for the increases is that several major supermarket chains are preparing to close significant numbers of their conventional stores next year to concentrate instead on their online sales and pick-up/delivery operations. Those options have quickly become more popular since the pandemic contactless service and social distancing rules went into place early last spring. He estimates that altogether the major supermarkets will close between 300 and 400 current locations, total. The new warehouse-modeled, ‘click and collect’ model (Amazon and Walmart are bot doing this for groceries already) is also much easier and to cheaper to operate, pandemic constraints or not. But there are costs related to converting sizeable number of supermarket locations to Amazon-like fulfillment centres.

“If you are a consumer you can expect to pay five-to-seven percent more, compared to if you went to the store to pick your own food,” Charlebois says, said, explaining the industry is struggling to determine how best to permanently pass those costs on to shoppers. Still, we’re told that there should still be enough traditional-style supermarkets to satisfy those who want to preserve their ‘right’ to choose their own food items.

One key consideration to continuing to go to the market (and maybe driving farther and burning more time and gas) is that, Charlebois  notes, the Amazon model will cost you an extra 4 to 5 percent – mainly to cover the added cost of delivery to your door doorstep.

Delivery ‘fees’ are currently under scrutiny b y a number of government authorities which have found that – until the issue was brought out into the open recently – consumers were being charged a premium of from 30 to 40 percent for delivery of restaurant orders placed online or via smart phone apps. During the COVID-19 crisis, this sort of gouging isn’t as great a concern as it might otherwise be. Right now, folks are just glad contactless service is available at all, to help them avoid going out in public and risking infection.

You don’t get nothin’ for nothin’

Chalebois says the two most probable options for camouflaging or softening the impact of new delivery fees are either a new delivery ‘premium’, added to your order like another layer of sales tax, or an annual ‘membership’ to the service, which would tie consumers to the same store for the duration of the agreement. Either way, such ‘memberships’ could be constructed to offer discounts to members from time to time, according to the availability of deals from manufacturers. This kind of thing has already become a common component of Fast Food chain ‘loyalty program’ memberships, which might make the idea go down easier with customers.

Of course, all the foregoing speculation is merely Charlebois’ speculation based what has recently come to pass in the grocery industry and what could be waiting in the wings.

I’ll take my chances and see how the whole food retailing revolution pans out before committing to anything new.