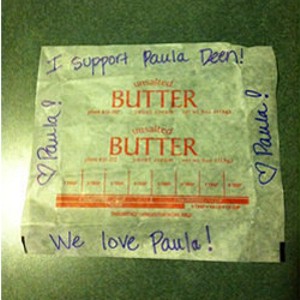 Paula Deen’s recent scandals continue to spawn spinoffs and contingent controversies. The latest development has Deen fans in their hundreds of thousands up in arms, sending butter wrappers in their (potentially) millions to the companies that fired Deen, demanding that the injustice be undone. 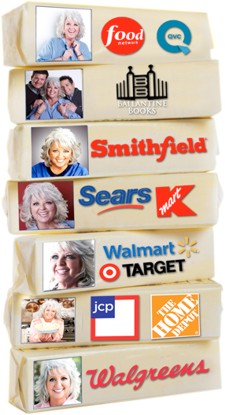 The Food Network, JC Penny’s, WalMart, Sears and a host of others fired Deen or cancelled their sponsorship of her signature products after it was disclosed, in a court deposition, that she admitted to using the ‘N’ word once, “But it was a very long time ago.”

Not good enough for the image-sensitive mega brands, who summarily cut her adrift. However… Her legions of fans – including a hard core of more than 600,000 who have ‘Liked’ the Butter For Paula Facebook page.

The butter wrappers symbolize Deen’s long-time association with Butter, which she used to lavish on almost everything she cooked. Google her under ‘Images’ and you’ll find her posing with butter-stick mascots, beside a butter sculpture and even pushing a new line of Paula Deen ‘Finishing Butters’, designed to help you control your butter use by adding them at the end of cooking rather than all the way through. Wait… “Control your butter use?” Yes! She bowed to a flood of criticism about her butter-love a year or so ago when she was diagnosed with Type II Diabetes and not only went on a diet, but took her whole family with her. Then, she wrote a new cookbook, championing ‘healthy eating’, and was poised to relaunch herself as a new, up-to-date, healthy foodworld icon.

Well… The fans have spoken and the world is waiting to hear what the food giants have to say in response.

“A corporation without Paula Deen is like a butter wrapper without butter.”

That’s the official slogan of the Butter for Paula protest group. You can take up the cause by simply sending a butter wrapper to The Food Network or any (or all) of the other mega corporations that turned their backs on Deen in the heat of controversy.

We’ll be keeping an eye on developments in the ongoing Buttergate Scandal. Stay tuned!