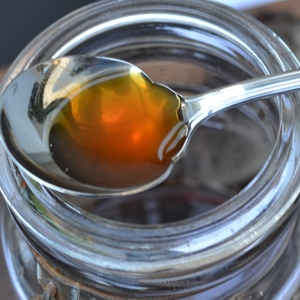 Birch Syrup, an old favourite in the West and Midwest, is making inroads into Ontario and Quebec – traditionally Maple Syrup Central. Many easterners have never even heard of Birch Syrup, let alone tasted it. But interest is beginning to build as Maple Syrup prices continue to rise… 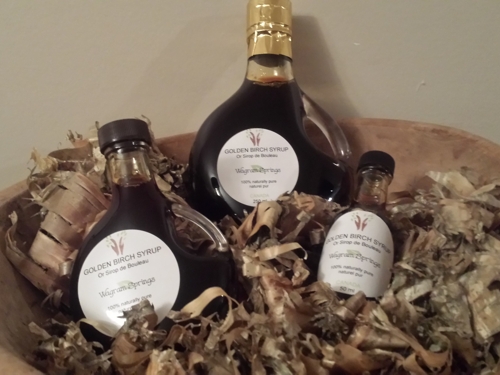 Some of Bert and Kathy Beilke‘s Birch Syrup products.
(Read more about them below…)

Just Google ‘Birch Syrup’ and you’ll see how popular this amber nectar is in locales outside the U.S. Northeast and Central Canada!

Birch Syrup is made in the same way as its Maple cousin, but starts as the sap of the Yellow Birch, plentiful in the U.S. Midwest and Canada’s West.

Birch syrup costs more to produce because its sap is less sweet and requires
a longer evaporation time. It takes 130 litres of sap to make one litre
of birch syrup. Maple syrup, by comparison, averages 35:1.

They make it as far north as Alaska. Boreal Birch Syrup of Thunder Bay, ON, calls it ‘The Syrup of the North’. Now, Bert and Kathy Beilke of Moorefield, ON, about 2.5 hours west of Toronto in southwestern ON, have brought it even further east? It seems like it’s just a matter of time before Eastern Maple Syrup producers start making Birch Syrup, too.

But there’s a problem…

Maple Syrup don’t to dilute the market for their flagship product, or even cause a drop in prices. And, as long as easterners don’t get a taste for Birch Syrup, that’s not likely to happen. Except that people like the Beilke’s are pushing the issue.

I love Maple Syrup and I’ve tasted Birch Syrup. They’re not the same thing and shouldn’t be considered competitors. However, they are interchangeable in applications where you want a liquid sugar with a distinctive flavour. But, heck! Honey is also ion that category. And Molasses.

…There’s probably a lot more Birch Syrup made in Northern North America than there is Maple Syrup. But it’s still a cottage industry, for the most part, and there’s no national Producer’s Organization in Canada, as far as I can tell, to publicize and popularize the product. There’s also no way to tell what the total annual Canadian production of Birch Syrup is. If I was a Maple Syrup producer, I’d pray that the Birch people don’t get organized on the scale of my industry. They could put up formidable competition if they wanted to.

If you get a chance to try Birch Syrup, try it. You might like it. But, if you’re expecting something as distinctive as Maple Syrup, you might not. In a taste test conducted by McGill University scientists in 1976, “The syrup was judged as being acceptable by 59% of an 82-member taste panel.”