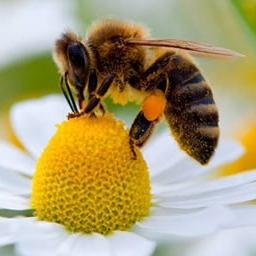 To Bee or Not To Bee? There’s No Question!

You gotta have Bees. Hives and hives and hives of Bees. Otherwise, at least a third of all your food crops don’t get pollinated and there’s a massive crop failure. And that’s a good way to trigger severe food shortages which, in turn, will trigger dramatic food price increases.

Buzz the Bee, mascot for Honey Nut Cheerios, offers Grumpy Cat a hit
of happiness in the form of a lick of honey. We all need a little
sweetness sometimes…

When I was in University I majored in English and History. Accordingly, I was required to select option courses that had nothing to do with my majors. This was held to be broadening and enriching for me and my fellow students.

Just for the heck of it, I opted for Apiculture – the husbandry of Bees, a practice without which we would have a lot less food on our tables, purchased at much higher prices.

What’s happening to the Bees?

Did you know that more than one third of our food crops are pollinated by Bees? Without pollination they would not bear fruit and society as we know it would be in big trouble.

The problem is, Bees have been under attack lately. First, it was the indiscriminate use of pesticides and, more recently, the onset of a condition known as Colony Collapse Disorder. CCD occurs when the majority of worker bees abandon a hive and leave the Queen behind. The bees that leave simply fall off the radar. And the hive is no longer viable. The cause of CCD is believed to be stress. We can all identify with that.

CCD has been reported since Roman Times, but not nearly as severe as it has been in the past couple of decades. According to Wikipedia, “In the six years leading up to 2013, more than 10 million beehives were lost, often to CCD, nearly twice the normal rate of loss.”

The UN Food and Agriculture Organization says losses from lack of proper pollination cost the agriculture industry more than (US)$200 billion per year, world wide.

There are lots of things we can all do to help the Bees survive and thrive.

The two easiest ways are to avoid pesticides that are harmful to Bees and to create a welcoming environment for them. But there’s another thing we can all do that not only helps the Bees but brightens our world.

General Mills Canada Inc., a leading producer of Breakfast Cereals and other Grain-based foods, has launched the Bring Back The Bees project. They’re giving away free flower seeds, in partnership with Vesey’s Seeds. Plant ’em wherever you have room for a slash of colour!

The Bring Back The Bees Web page reported that, as of this writing, almost 75.8 million seeds had been sent out. That’ll help a lot of Honey Bees.

Oh, yes – General Mills is the maker of Honey Nut Cheerios, so they do have a vested interest in preserving the Honey supply. And I don’t see anything wrong with that!