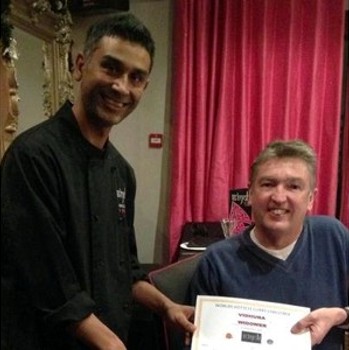 What is it with those barmy Brits and their Hot Peppers?

Back in November, we brought you the wacky tale of a young Chef at a London restaurant who wanted to create the Hot Sauce to beat all Hot Sauces in honour of the eatery’s upcoming Wing eating contest. He tried it himself, just to be sure, and ended up in the hospital. 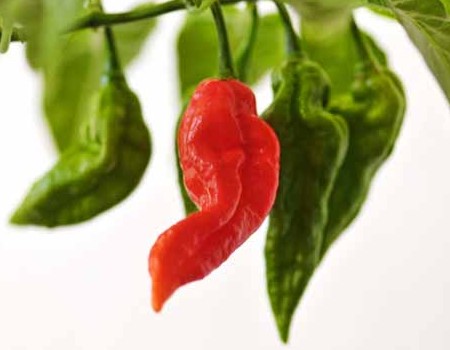 Naga Buht Jolokia – The Ghost Pepper. Approximately 2x life size.
Don’t try it at home. Or anywhere, for that matter!

That debacle revolved around the infamous Naga Buht Jolokia, or Ghost Pepper, clocking in at over 1,000,000 Scoville Units of heat. (Scotch Bonnets / Habañeros only rate a relatively tame 200,000 Scovilles.)

Now, another intrepid Chef, Muhammed Karim, kitchen boss at Bindi Indian Restaurant in Grantham, Lincolnshire, has created a “chili challenge” based on the infamous Ghost Pepper. It’s a Chicken Curry officially titled “Naga Infiniti”, but back in the kitchen, they call it “The Widower”. No wonder. It contains about 20 of the incendiary peppers! The Chef reportedly wears gloves and goggles while preparing it.

Dr. (yes, a doctor!) Ian Rothwell, 55, of Sudbrooke, Lincs., became the first guest at Bindi to ever finish a standard serving of Naga Infiniti yesterday. Bindi made him sign a disclaimer before they would hand him the spoon, and it’s probably a good thing for them that they did.

Seems that Rothwell had to get up and walk around for an hour or so mid-meal, to cool off. Witnesses say he was haulcinating all the while, and for some while afterwards. But he finished the stuff, succeeding where more than 300 before him had failed.

Rothwell is no stranger to danger. He climbed Mt. Kilimanjaro last year. It took him 7 days. And he says that was easier than finishing Karim’s Curry.