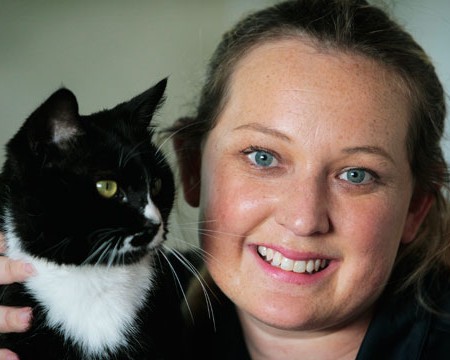 If indie film maker Morgan Spurlock’s shocking 2004 mini-feature, Super Size Me didn’t convince you that fat, salt and sugar are addictive, then this will. Seems a stray cat in New Zealand ‘adopted’ a suburban McDonalds franchise and ate nothing but the McFood it could scrounge and beg for more than a year…

Frankie the cat and his foster mom Jessica. Looking for a forever home.

Frankie the cat was apparently abandoned as a kitten, by some highly irresponsible people who moved out of a neighbouring apartment complex, and wandered into the McParking Lot. There he found a ready source of food, at first from customer’s leavings and, later, from ‘donations’ by McRegulars who enabled his foodaholism by giving him some of their McNuggets or even buying an extra burger patty specifically for him. His scam was to sit at the exit to the Drive-Thru like a toll collector and skim his cut, right off the top.

All fun and games until…

The restaurant’s employees gave him his name and kept an eye out for him. He became a local celebrity. But, as happens all too often when fame and notoriety carry one too far, he fell prey to his excesses. A sympathetic McWorker noticed recently that Frankie was looking a little rough around the edges: dull, matted coat, swollen face, puffy eyelids that wouldn’t close properly…

She called the SPCA to stage an intervention and they slapped him directly in rehab.

Here’s the kicker: For the first couple of days, Frankie wouldn’t even look at food if it wasn’t something he knew from the McDonalds menu. He turned his nose up at even the most expensive and highest-quality cat food. He was obviously hooked. Hooked hard. His SPCA case worker, Jessica Watson admits that, at one point, she was so worried about him starving, she actually considered going out and buying him a cheese burger.

But, as we all know, a cat’s stomach will get the better of his head and heart if he gets hungry enough. So it was that Frankie finally shook off his demon and started eating a nutritionally-balanced cat diet.

Our hero is now back in the pink and the SPCA is looking for someone to give him a permanent home.

Frankie was saved by the combined efforts of a loving, caring community and the decisive actions of a few concerned friends. Will you or your loved one be so fortunate if you are sucked into the back hole of fast food addiction?