Face of Weston/Loblaws Now The Boss

George Weston has passed the reins of power to his son, Galen, who is now Chairman of the billion-dollar George Weston Ltd. food merchandising mega-operation. You already know Galen’s face as the media face of Loblaw’s supermarkets. Now, perhaps, we’ll see what he’s really like… 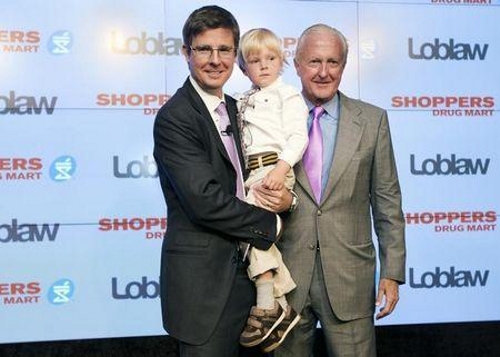 Galen Weston (left), his son (centre) and his dad, George (right). The past,
present and future of Weston’s Ltd.

Weston’s is family-owned., so there’s no public record of what it’s worth as a company. but Forbes magazine says Galen, himself, is already worth (C)$9.6 billion. No Bill Gates or Warren Buffet, he. But he’s still pretty well off compared to most other Canadian billionaires. In fact, he’s the second wealthiest man in Canada. After his dad, we presume. And he now controls a huge portion of the Canadian production, distribution and retailing sector.

Galen Weston is now 43. If he follows the example of his dad and grand dad, he’ll rein until he turns 75, then hand it all over to his eldest son. That’s 30+ years for him to put his mark on the company and the Canadian foodscape. I wonder what our diets will look like by then? I wonder what our supermarkets will look like by then? I wonder if we’ll still be able to buy all the foods that are familiar and desirable to us today? Who can tell?

Well… We can tell, already, what Galen is going to be up to in the near future. He made a big deal about demanding price reductions from his suppliers earlier this year, in order (he said) to pass on the savings to consumers. Of course. we all know that savings to companies from their suppliers are never passed on. At least I haven’t seen anything but higher prices at Loblaw’s recently. Savings are simply transformed into higher profits on the books and passed on to the shareholders. But it sounds good to those who don’t know how big business works.

One consequence of Weston Ltd. turning the screws on its suppliers is that some products and even some entire brands have disappeared from Loblaw’s supermarkets. I have no proof of this, but I know that some products I bought regularly at Loblaw’s-controlled stores have vanished. And the managers of those stores have said that the head office just de-listed them because the corporation couldn’t come to a ‘suitable agreement’ with the manufacturers. Too bad, said the manager; the products in question were popular and superior to the ones now left on the shelves. Could these products be victims of Loblaw’s demands for lower prices from suppliers? I don’t believe in coincidences.

I hope that current and future spats with suppliers don’t result in the further narrowing of my choices at the supermarket. Loblaw’s is Canada’s largest food retailer with more than 1000 stores under its control comprising 22 national and regional store name banners and the PC private label programs under the President’s Choice, Joe Fresh, No Name and T&TY brands. Not to mention their house-branded Financial Services company. Is it right? Is it fair to consumers or suppliers that one company – one man, Galen Weston – should have that much power over something as fundamental and essential as the food we eat?

That’s for you, the consumer to decide. And then you can vote with your wallet.