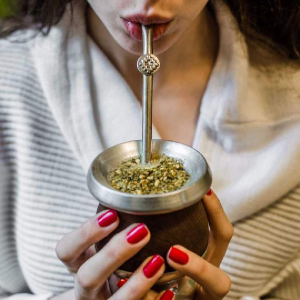 Argentina may not be the first country you think of when you’re musing on street food. But it can boast a rich, meaty tradition of dining al fresco, possibly a result of a massive influx of European immigrants from the mid-19th to the mid-20th century. And it all revolves around beef! 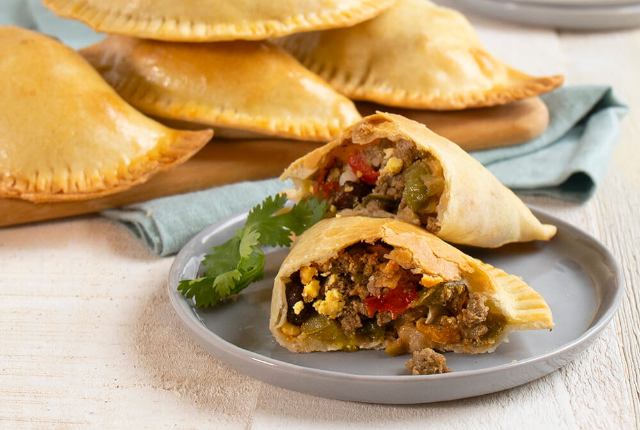 When I think of Argentina, I think first of its national love affair with soccer. Then, I think of rough-and-ready gauchos on their wiry ponies tending cattle on the vast grasslands of the Pampas. These nomadic horsemen enjoyed their peak of popularity from the mid-19th to the mid-20th century, and became as romanticised and iconic in South America as the American cowboys of the Old West. And from there, one’s thoughts can’t help but stray to the most iconic of Argentinian foods – beef, in all its forms.

While the term ‘grab-and-go’ is often used to characterize the street food traditions of many cultures, that doesn’t apply in Argentina. You’ll be hard pressed to find a food truck (the vehicle of choice for Argentinian street eats vendors since carts and stalls went out of style) that isn’t surrounded by little umbrella-festooned tables where patrons can relax and enjoy their fmeal in an unhurried atmosphere. 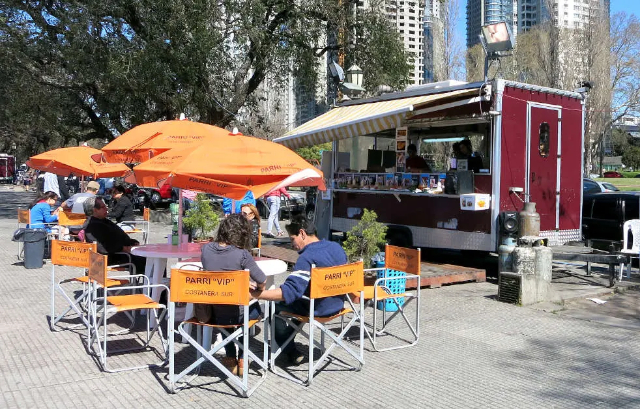 But there are still cafés, pubs and all types of restaurants in the big cities – all the way up to white tablecloth dining rooms that rival the ritziest of Europe.

Argentina won it’s war of independence from Spain in 1861, declaring itself a federation. As Wikipedia, explains: “The country thereafter enjoyed relative peace and stability, with several waves of European immigration, mainly Italians and Spaniards, radically reshaping its cultural and demographic outlook; over 60 percent of the population has full or partial Italian ancestry, and Argentine culture has significant connections to Italian culture.”

A mosaic of styles and forms

Argentinian street food is composed of what I’ll call a mosaic of styles and forms contributed by newcomers from such diverse cultures as Middle Eastern, Russian, Japanese, British, and Jewish – not to mention the cornerstone influences of Spain and Italy. Britain gave Argentina the tradition of Afternoon Tea. Italy brought its famous street-side café culture.

As a natural consequence of this epic diversity, Argentina’s street food menu reads like an international smorgasbord, but each dish has been tweaked and massaged into something uniquely Argentine.

Empanadas: The universal hand pie of the Spanish-speaking world. Depending on where you order them, they may be stuffed with chicken, pork, ham and cheese or fresh fruit or veggies. But in Argentina, they are most often made with a savoury beef mixture wrapped in crispy, golden pastry. And every region of the country has it’s own traditional recipe. They’re relatively small, usually sold 2 to a serving. Once known as ‘the working man’s meal’ – like the British pork Pie or the American Ham sandwich – the empanada is now an Argentine national staple and a universal favourite. 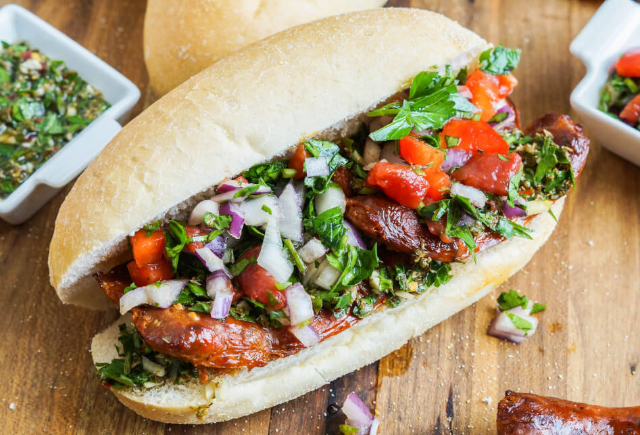 Think of them as the Stadium Dogs of Argentina. They’re all over the soccer venues, and Choripan trucks and carts are everywhere during Argentina’s many fiestas.

Milanese: An Italian-sourced Veal Cutlet. It can be either veal or beef, cut thin, breaded and fried or baked. It’s basically the same cutlet you’ll find all over Europe and its former colonies. But the Argentine version is served in a sandwich, topped with cheese, lettuce, tomatoes, onion, and a spicy sauce. The cutlet can also be found plated with fresh veggies on the side and French-fried potato wedges.

Fugazzeta: Argentinian Pizza. Enter, the Italian influence, with a heavy hand. But this national fave is something distinctly different. The crust is inspired by Italian Foccacia, and the toppings are an Argentinian take on the Northern Italian Fugazza, a twin-Crusted stuffed pie. 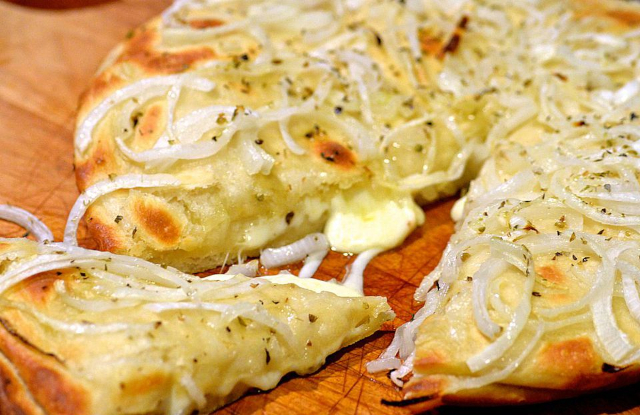 The Argentine version has only a bottom crust and does not use tomato sauce. Just cheese, onions, olives and oregano. Although… Many folks these days do add meats or other typical pizza toppings. The variety is infinite.

Milanese: An Italian-sourced Veal Cutlet. It can be either veal or beef, cut thin, breaded and fried or baked. It’s basically the same cutlet you’ll find all over Europe and its former colonies. But the Argentine version is topped with cheese, lettuce, tomatoes, onion, and a spicy sauce. The cutlet can also be found plated with fresh veggies on the side and French-fried potato wedges. 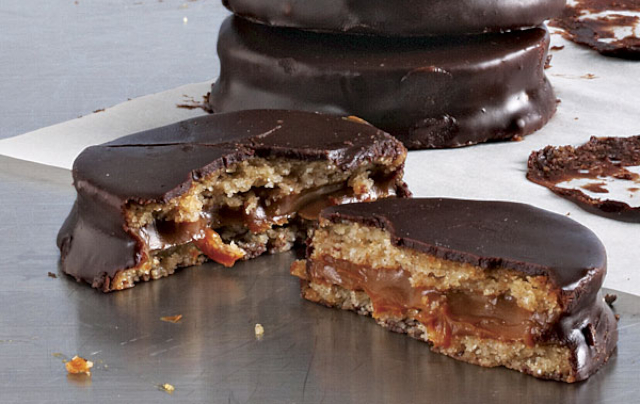 Argentinians love their sweets, and many are adapted from Italian specialties. This one is a universal fave, found all over the country at street food carts and trucks. I’ve had them. They’re addicting!

Garrapinada: Peanuts or almonds, roasted and dredged in caramel, honey and powdered sugar. Get them by the bag and pop them as you stroll around town. They fill the role of popcorn, pretzels, and roasted, salted nuts in other cultures.

Yerba Mate: Indigenous Herbal Tea with special attributes. The Yerba plant is a member of the far-flung Holly family, native to the temperate and subtopic regions. Like regular Black Tea. 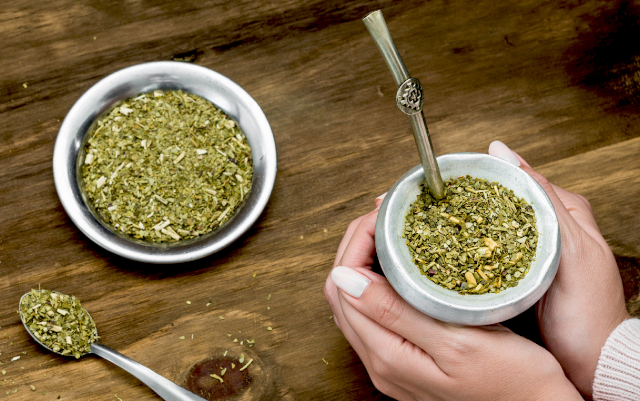 Matexperience.com provides the following profile of Yerba Mate’s falavour: “The way that I would describe the taste of mate to someone who has never had it is that it tastes like a bitter earthy tobaccoey and sweeter green tea but bold and tart like a black tea with effects of coffee.” That ‘effect’ is a bit of a caffeine buzz. It’s traditionally been credited with medicinal powers. This simple herbal infusion is traditionally drunk from a dried gourd (see photo, top of page), through a special straw called a Bombilla, which filters out the loose crushed herbs from the infusion.

See what I meant?

This forgoing as just some of the most representative examples of the many and varied Argentinian street food forms. Get Googling and prepare to be be tickled by all the Argentinian takes on foods that have been contributed to it’s culture by waves of immigration from all over the world!

2022-05-16
Previous Post: Sunday Musings: Make Nature Part Of Your ‘Well Being Diet’
Next Post: Yerba Mate: Good For You? Or Too Good To Be True?