We haven’t felt the heavy, cold hand of serious food shortages here in North America (yet), nor have we experienced the kind of economic inflation they’re suffering under in the UK and EC. But their current situation, quantified in a new poll, may be a preview of what’s to come for us… 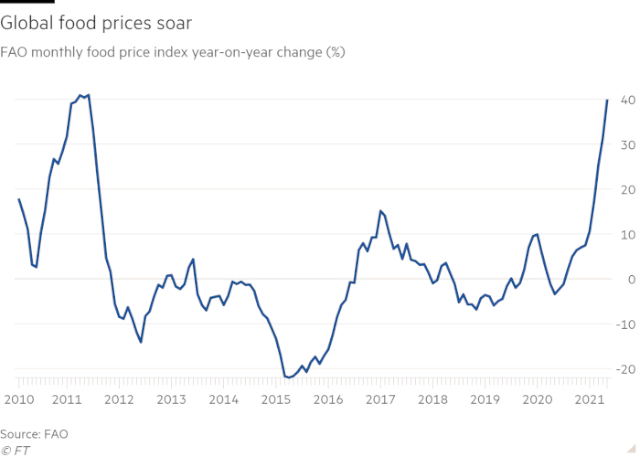 I don’t know about you and yours, but my family hasn’t missed a meal since the start of the COVID emergency because food cost too much or was unavailable. We have down-sized our expectations, though, as many folks have, switching from major brand name products to supermarket house brands, substituting frozen fruits and veggies for their more-expensive (but only marginally more nutritious) fresh counterparts, and learning to be flexible when a favourite product is temporarily out of stock.

In the UK, the inflation rate was at 7 percent, year over year, as of last month, and is expected to rise to at least 10 percent by the end of this year. And a recent poll of more than 10,500 Britons revealed that folks there are already facing some tough choices.

The poll, conducted last month for the UK’s Food Foundation, shows that 1 in 7 adults live in family groups where folks have skipped meals, reduced serving sizes or even gone hungry for various periods of time to make ends meet on their food budget.

Overall, the number of folks struggling to afford to feed their families properly has risen by 57 percent over the past 3 months.

Second only to rising food costs, energy costs have been rising sharply since Brexit, and food bank operators in the UK say they’ve been getting more and more requests for foods that can be served cold, as their clients fight to cut energy bills.

More than an economic crisis

Anna Taylor, executive director of the Food Foundation told the BBC the situation is “rapidly turning from an economic crisis to a health crisis. […] The government needs to realise the boat is sinking for many families and it needs to be fixed. Bailing out with emergency food parcels is not going to work.”

An unnamed government spokesperson replied: “We recognise the pressures on the cost of living and we are doing what we can to help, including spending £22 B across the next financial year to support people with energy bills and cut fuel duty. […] For the hardest hit, we’re putting an average of £1,000 more per year into the pockets of working families on Universal Credit [Welfare], have also boosted the minimum wage by more than £1,000 a year for full-time workers and our Household Support Fund is there to help with the cost of everyday essentials.”

Sir Michael Marmot, director of the UCL Institute of Health Equity, said the survey’s findings indicate society is, “failing in a fundamental way. […] These figures on food insecurity are all the more chilling because the problem is solvable. But, far from being solved, it is getting worse.”

But that’s a mere triviality compared to the situation in other countries, where the percentage of the average family’s income spent on food has soared to almost unbelievable heights. (See infographic above.)

Global warming, widespread drought, international economic disruption caused by the Ukraine war, and steep rises in the cost of fertilizers have all contributed to a perfect storm that’s leaving millions in poorer countries starving, or on the verge.

My late father used to say, when I was moping because we couldn’t afford some luxury: “Just look around and you’ll soon see someone who’s worse off than you are.” And he was right.

We in North America are facing rising food costs, and I don’t doubt that some folks in our own neighbourhoods have resorted to skipping, or reducing the size of meals to make sure their families get something to eat. But I’ve seen no evidence that this is a widespread phenomenon. The situation in the U.S. is reportedly somewhat worse, but still nowhere as dire as the one illustrated by the new UK poll.

My question is, how much farther will inflation rise before it tops out? And hopefully starts to come down again? I’m not ruling out having to take desperate measures to cope with increasingly desperate times over the next few years.

2022-05-11
Previous Post: Ancient Tupperware®: Do As The Afghanis Do?
Next Post: Baby Formula Shortage: A Totally Avoidable ‘Crisis’