We’ve mentioned this phenomenon previously, but specifically in reference to on e kind of retail container: The omni-present Aluminum Beverage Can. Now, we hear that at least one other type of food container is getting hard to find. Hint: Did you plant a ‘victory garden’ this summer? 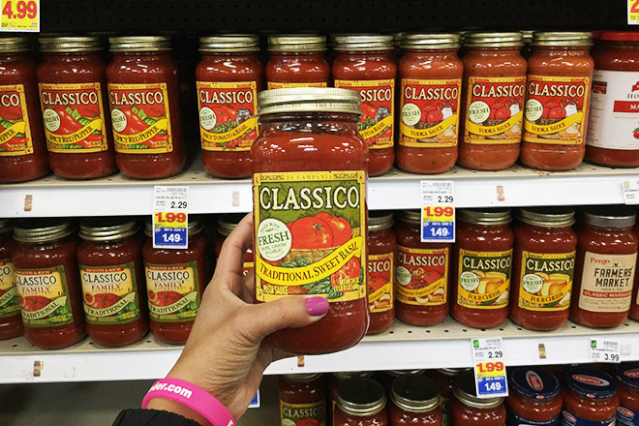 Just a few of the many varieties of Classico Pasta Sauces;
all packed in original, branded ‘Mason’ jars…

Our beverage can report explained why Aluminum, vending-machine-friendly beverage cans are coming up so short. Perhaps surprisingly, it’s because of rocketing demand for Beer, Soda, various specialty Waters and other bevs have pushed orders ahead of production capacity. And the industry has also suffered pacing issues sue to U.S. President Donald Trump’s on-again, off-again duties on imported Aluminum. Not mention that recycling programs are not (yet) producing high enough volumes of scrap Aluminum to keep the Can industry cycling smoothly.

In addition, millions of servings of Soft Drinks, Juices and other Beverages usually poured from fountains into paper and plastic containers are not being served in restaurants but being redirected to cans and, to a lesser extent, plastic bottles for take-home consumption.

Finally, a planned build-out of can manufacturing facilities across the map is not slated to come online until near the end of next year.

But there are a couple of other container shortages – indications of which I haven’t seen in the news until just the past few days – that could have broader and more important implications for the coming off-season for local food production in most of northern North America.

Food comes in cans, too

Industry observers are warning that the rage for home-hoarding of canned foods early in the COVID-19 crisis has clogged the usual recycling system at the home end as the folks who are prone to hoard have stopped buying unusually large amounts of long-shelf-life, ‘safe’ canned foods. This comes at the worst time, as demand within the commercial canning sector for standard steel cans is peaking under a bumper harvest of all kinds of summer-harvest foods.

Not to mention that demand for ‘non-perishable foods’ are up in the past few weeks from an overall 13 percent over last year, and Soup sales are 25 percent higher. Some observers blame all the publicity the ‘second wave’ of COVID-19 is getting.

And if that wasn’t bad enough…

Many brands of prepared Sauces, Juices and Sauces still come in Glass Jars, and the consumer subgroup that’s being most frustrated with the short supply of those – home canners and preservers – is not mincing any words, telling everyone they listened to when they planted their anti-COVID-19 ‘victory’ gardens last spring. For a variety of reasons, they have no options but to seal their harvests in heavy-duty plastic freezer bags and chuck them in the freezer. But freezer space is limited in most homes, and most were depending on the usual ubiquitous availability of so-called Mason Jars.

The problem? Most commercial producers of prepared Pasta Sauces and related foods (largely preserved Veggies and condiments) have first call on the Glass containers that can be produced through long-ago arranged standing orders coordinated with their production runs. In other words, they get first call on what’s available.

One solution to the problem? If you feel there may still be food shortages (or even chances of them) next year or the year after, start buying some or all of your supermarket canned and jarred foods in Mason jars and store the jars away for later use. There may be no glass jars in the usual places, such as hardware stores and supermarkets, this fall, but there are lots of the 2-piece, serializable, reusable lids. But this is still no help for this year’s harvest. Could your answer lie in asking friends and family to ‘lend’ you space in their freezers? Trade them some of your ‘product’ for the privilege!